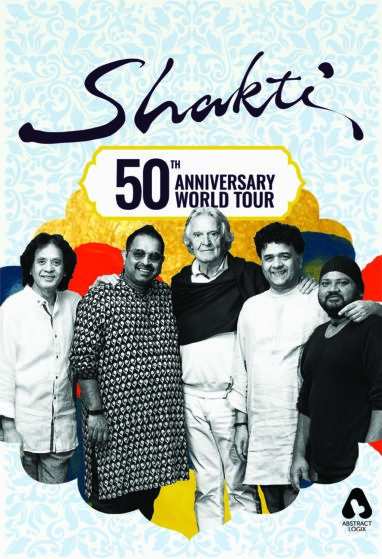 As the 50th anniversary tour of Indo-jazz fusion band Shakti gets under way, we choose 10 tracks played over the years. The group will perform in Bengaluru on January 20, Mumbai on January 22, Kolkata on January 24 and New Delhi on January 28.

From the original line-up, only guitarist John McLaughlin and tabla maestro Zakir Hussain are still with the band, which was renamed Remember Shakti for many years before going back to its earlier title. The current group also includes vocalist Shankar Mahadevan, violinist Ganesh Rajagopalan and kanjira player V. Selvaganesh.

The Mumbai show will feature original member Vikku Vinayakram on ghatam. In the past, flautist Hariprasad Chaurasia and late mandolin player U. Srinivas have been part of the group. The list is in chronological order.

The 18-minute piece was first recorded at Southampton College in New York’s Long Island. Filled with energy, it has some exquisite work by Vikku Vinayakram and Shankar, with the others giving great company. The video of their live performance at Montreux, Switzerland, became very popular.

The tune lives up to its title of being a dance of happiness. It begins with Zakir and Vikku reciting percussion bols, and thereafter settles into a wonderful melody line. This was one of the highlights of the album A Handful Of Beauty, which also had the tracks ‘Lady L’, ‘India’ and ‘Two Sisters’.

With their marvellous bursts of energy, ‘Joy’, ‘Le Danse Du Bonheur’ and ‘Mind Ecology’ could actually be played as a three-part suite as they just flow well together. The last-mentioned track, which opens the album Natural Elements, is credited for composing to McLaughlin alone. The guitarist dominates the first half before the violinist takes over.

One of the most sublime Shakti pieces, this was composed by McLaughlin and Shankar. After the guitar build-up, the violin does wonders, before the guitar comes back again. The playing by both maestros is exquisite. Another favourite from the same album is ‘Bridge Of Sighs’.

After a long break, Shakti returned in the 1990s, now calling themselves Remember Shakti. Flautist Chaurasia joined for a brief spell, in place of Shankar. One of the tracks they played was ‘Lotus Feet’, which was earlier performed by the Mahavishnu Orchestra, McLaughlin’s jazz-rock group, and the original Shakti. Chaurasia’s rendition is magical.

Chaurasia was with Remember Shakti for a brief period, after which mandolin wizard Srinivas joined the line-up. This composition was by the youngster, and a live version was released on the album The Believer. Kanjira exponent V. Selvaganesh was also part of the group by then.

This was composed by Zakir for his mother after his father Ustad Alla Rakha passed away on February 3, 2000. The video is of a live performance whose date is unknown. McLaughlin and Zakir show remarkable chemistry through most of the piece, with Srinivas doing a cameo. The beginning is the same as the Mahavishnu Orchestra track ‘Lila’s Dance’

This 27-minute raag Kirwani piece was recorded at the now-defunct Rang Bhavan in 2000, and released on the album Saturday Night In Bombay the following year. Santoor maestro Shivkumar Sharma appears as a guest and this piece is played like a classical composition, with both musicians complementing each other. The build-up and finale are magnificent.

Srinivas gave an Indo-fusion twist to this Thyagaraja kriti. Vocalist Shankar Mahadevan had joined the group, and sang it his own way. Fans hum the main line though unaware of the deeper meaning. This has been performed regularly at Remember Shakti concerts over the past two decades.

‘Is That So?’ isn’t a Remember Shakti album, as it features only McLaughlin, Zakir and Mahadevan. But the song ‘Sakhi’, adapted from a thumri, has been performed at numerous concerts. The tune has a melody that will keep people singing along. The words are, “Sun ri sakhi, chunar bheege jaaye, dekhe sab naari saheli, jiya ghabraaye”. The vocals come from the heart.

Fans are eagerly awaiting the shows, as barring one show in Kolkata in 2020, they haven’t had a big tour in India for a long time. The set list will be interesting.