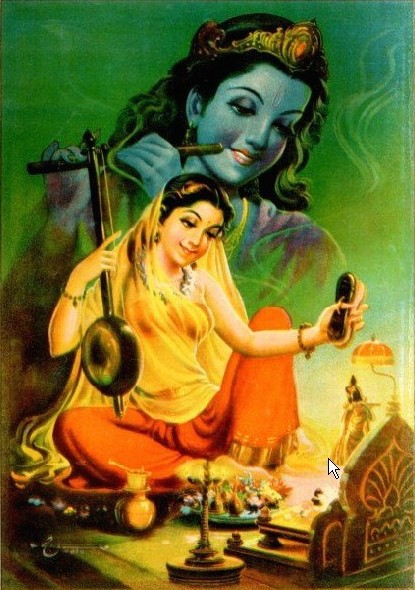 Over the years, Meera bhajans have had a special place in devotional music. Written by 16th century poet Meerabai, one of the important personalities of the Bhakti movement, many of them talk of her devotion to Lord Krishna. Though she was born in a royal family in Rajasthan, she left all material pleasures to pursue her goal.

On the occasion of Janmasthami, Lord Krishna’s birthday, we choose 10 Meera bhajans sung by some of the greatest vocalists. This selection is in no particular order, and contains a mix of popular songs and rare renditions.

In 1945, the legendary M.S. Subbulakshmi starred in and as ‘Meera’. While the Tamil film was a huge success, the Hindi dubbed version was released in 1947. Both soundtracks were composed by S.V. Venkatraman. Another popular song was ‘Mere Toh Giridhar Gopal’. This was Subbulakshmi’s last film as an actress, as she focused on singing thereafter.

One of Mewati gharana maestro Pandit Jasraj’s most requested bhajans, this concluded many of his concerts as it was composed in raag Bhairavi. One of the stanzas is, “Gaaya gaaya Hari gun nis din, kaal byaal ri baachi, Shyam bina jag khaara laaga, jag ri baata kaachi, mai sanware rang raachi”. This ranks among the most soulful renditions of a Meera bhajan.

Though Jagjit Singh was primarily known for his rendition of ghazals, he also recorded some marvellous bhajans, specially in the latter half of his career. This one, written by Meerabai, has been composed in raag Puriya Dhanashree, and begins, “Hari tum haro jan ki peer”. Like most Jagjit bhajans, this has a temple effect with strong choruses. His voice has plenty of depth.

This song was separately recorded by both Lata and Asha Bhosle. The latter, composed by Jaidev, was released in 1971. It makes fantastic use the santoor and bansuri. It begins with the lines, “Aali re mere naina baan padi”. The song has an upbeat air that makes it frothy, besides Asha’s vocal nuances. Lata sang the words ‘More nainan’ in her rendition.

August 16 marked Pakistani maestro Nusrat Fateh Ali Khan’s 25th death anniversary. While his qawwalis and Sufi numbers remain popular, there are many who continue to play this bhajan. There are various versions, including a 30-minute qawwali-styled rendition and a seven-minute edit. Handclaps and backing vocals give this a special flavour, with Nusrat’s unique style adding charm. This video clip is rare.

Anuradha Paudwal opened her 1989 album Meera with this melodious bhajan. “Aye ri main toh prem deewani, mero dard na jaane koi”, she sings. Music is by Shekhar Kalyan, who makes use of sitar and bansuri beautifully. The album has other gems like ‘Main toh saanware’ and ‘Mayee Ri Maine’.

The great Kishori Amonkar sang the beautiful ‘Pag Ghungroo Baandh’ at the Swar Utsav festival at India Gate Lawns, New Delhi, in 2003. She rendered it in her immaculate style, building up the mood gradually. The words are, “Pag ghungroo baandh Meera naachee re, main toh mere Narayan ki aapahi ho gayee daasee re”.

While we have stuck to the Meerabai repertoire here, there are numerous other  bhajans and film songs dedicated to Lord Krishna. One non-film gem is ‘Baaje Re Muraliya’ by Pandit Bhimsen Joshi and Lata. Many bansuri albums featuring Pandit Hariprasad Chaurasia will suit the mood too. Besides that, there’s flautist Ronu Majumdar’s 2002 recording Krishna’s Journey, which is a wonderfully structured concept album.