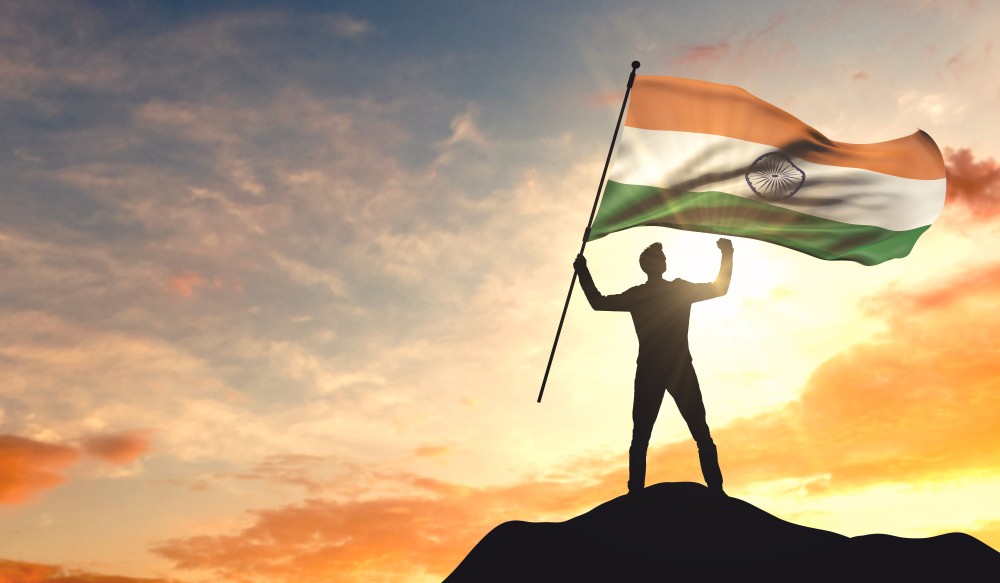 This year, because of quarantine and social distancing, the quantum of Independence Day public functions will be reduced. However, patriotic songs played at such events are known by many, and there is always a good amount of airplay on radio and television, and over loudspeakers.

Most patriotic songs are inspired by India’s Independence struggle but we also find some in reaction to the wars India fought against China and Pakistan. Some songs talk of the nostalgia felt by Indians staying abroad.

Here we choose 20 such songs. Most are from the movies but we have chosen some non-film ones too. The order is chronological, and the cut-off point is 1997, when India celebrated 50 years of Independence.

Written by poet Mohammed Iqbal, this became an anthem for opposition to British rule. It was also one of Mahatma Gandhi’s favourite songs. There have been many later recorded versions, including the ones by Pandit Ravi Shankar and Lata Mangeshkar.

Based on words by Bankim Chandra Chatterjee, this was also a popular patriotic song during the Independence movement. The film version was composed by Hemant Kumar, with separate renditions by him and Lata Mangeshkar.

This classic was written and sung by Kavi Pradeep, with music by Hemant Kumar. The film had other memorable patriotic songs like ‘Sabarmati Ke Sant’ by Lata Mangeshkar and ‘Hum Laaye Hain Toofan Se’ by Mohammed Rafi.

Picturised as an energetic village dance, this song proved music director O.P. Nayyar’s ability to do rustic tunes. Sung by Mohammed Rafi and Balbir, it was penned by Sahir Ludhianvi. The fact that star actor Dilip Kumar led the dance sequence added to the charm.

The magical combination of music director Naushad and lyricist Shakeel Badayuni create this gem, sung by Shanti Mathur and chorus. This worked well as both a children’s song and patriotic tune, and was performed regularly in schools.

One of Mangeshkar’s all-time classics, penned by Kavi Pradeep and composed by C Ramchandra. The song was written in the aftermath of the 1962 Indo-China war, and even brought Prime Minister Jawaharlal Nehru to tears when it was performed.

Lyricist Kaifi Azmi wrote “Ab tumhare hawale watan saathiyon” in this song from Chetan Anand’s war film. Music was by Madan Mohan and Rafi sang it soulfully. The song is part of most Independence Day ceremonies.

Prem Dhawan composed and wrote this song sung by Rafi. The film was based on the life of Shaheed Bhagat Singh, and also had the popular songs ‘Mera Rang De Basanti Chola’, ‘Watan Pe Marne Waala’ and the Bismil Azimabadi-penned ‘Sarfaroshi Ki Tamanna’.

One of Mahendra Kapoor’s most famous songs, this was picturised on Manoj Kumar and composed by Kalyanji-Anandji. Gulshan Bawra wrote the lines “Mere desh ki dharti sona ugle ugle here moti, mere desh kid harti”. A must on Independence Day and Republic Day.

Rafi and Manna Dey were joined by a chorus on this group song composed by SD Burman and written by Neeraj. It was picturised on Dev Anand and others, and became a regular feature at school functions.

“Dil diya hai jaan bhi denge ae watan tere liye”, wrote Anand Bakshi in this song composed by Laxmikant-Pyarelal and sung by Kavita Krishnamurthy and Mohammed Aziz. The song took place at a function held in a prison, and was motivational in nature.

Rahman’s music in Mani Ratnam’s Roja gave him a major career boost. It was released in Tamil first before being dubbed, and the Hindi lyrics were written by P.K. Mishra. Hariharan sang this outstanding song.

Like many songs in J.P. Dutta films, this was shot on a lavish scale. Composed by Anu Malik and written by Javed Akhtar, it was sung by Sonu Nigam and Roopkumar Rathod. It was a major hit that year.

This was the opening song of Rahman’s album Vande Mataram, released to mark 50 years of Independence. The composer sings the song himself, and the lyrics are written by Mehboob. The video by Bala and Kanika also made news because of its scale.

This article features as part of the Independence Day feature in the August 15, 2020 issue of Seniors Today. The magazine will be published on August 14. Look out for it.