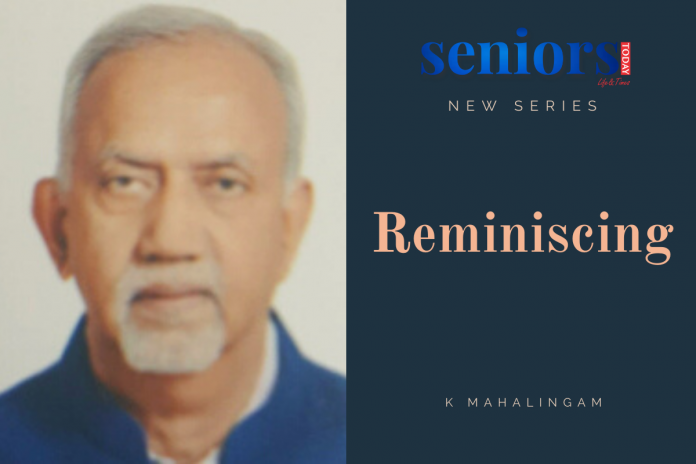 I am K Mahalingam. I retired from Samsung India Electronics Pvt.Ltd as Vice President Finance in the year 2017.

It is not often one is fortunate and privileged to see an organization grow from scratch to a behemoth over a period of 22, years as I was in witnessing Samsung’s phenomenal growth in India. Being associated with the company for  those many years simultaneously helped me  chart a personal growth in rising from the level of Assistant Manager to the level of Vice President after the company had just set its moorings in 1995. I fondly reminisce the memories of the 22 years journey and look back with pride playing a stellar role in being part of Company’s growth and witness the setting up of manufacturing facilities in Noida and Chennai culminating with the setting up world’s largest Mobile phone  manufacturing facility in Noida.  Spearheading the Project Team in setting up of the largest Mobile phone factory will linger long in my memory coinciding with my retirement. What was more gratifying was the continuous hard work and effort liaising with the State Government officials paved the way for potentially providing huge employment opportunities

I had a humble family background and did not have strong academic qualifications to make it big in the tough competitive corporate world but had the strong determination and burning desire to make a mark for myself in achieving the dream against all odds.  Since completing my graduation for a good 10 years or so I was still struggling when during the winter of 95 I got inducted at Samsung when they had just started their operations and were looking for experienced professionals to jump start its foray into the Indian Electronics market. I fitted their  bill  seamlessly  and merged into the Korean ethos and their management philosophy that provides  level playing field to people with right attitude and strong commitment.  Professionals with Result oriented approach and ability to create value got equal weightage along side professionals with  strong academic qualifications. When one works in such an environment and the tasks are demanding, one needs to be resilient and have the mental toughness to survive and succeed.

Positive Attitude, Hunger for Excellence, and Never-say-Die spirit even in adverse circumstances were some of the traits I naturally possessed which I further developed to stay relevant. These traits helped me script my success story and realized my dream of reaching the level where I finally reached with my long association which got severed only on attaining the age of superannuation. The journey through the 22 years was challenging but equally enjoyable and fulfilling.  A doctor friend of mine once said “ You are only as good as your last operation” and it applied in good measure working in a challenging environment like ours  as everyday you have to prove yourself which probably explains why the company made such rapid strides globally and also in India in just two decades.

Finance was my core but as I grew in stature I expanded my horizon to areas which were integral to the business, and  practically  got involved as a Key player in most of the projects mostly spearheading the projects and played a vital role  whether it was the implementation of ERP project at the global level or it was the Expansion Project of the Noida plant at the fag end of the career.  Having been brought up in a humble background helped me in empathizing and playing a mentor role for some of the young professionals and  feel happy when good many of them are doing so well carrying that legacy built on strong moral and ethical values. Professionally it was a truly enriching and satisfying experience  with lot of learning.

At the more fundamental and personal level I was a keen sports enthusiast and had a strong passion for music from school days as  I was born in a family which had a burning passion for music and  in my formative years I grew up listening to my sister  learning Carnatic music and my brother singing Rafi’s songs.  Having born in a family where I lost my father when I was barely 4 years of age we could not have the luxury of having a Radio but, listening to songs in Vividh Bharati and occasionally Radio Ceylon at neighbor’s place, I became ardent fan of Rafi Saheb enjoying the songs composed by legion of luminaries such as  Shankar Jaikishanji, OP Nayyar Saheb and Madan Mohanji, SD Burman da just to name a few and as I reached middle and high school level became a fan of Kishore Da, Pancham Da and of course always looked with reverence  the living legends Lataji and Ashaji.

I have participated in lot of stage shows in the late 70’s and 80’s and also participated in a TV show in the year 1989. Soon commitments at the work front and   family responsibilities took centre stage, but still used to sing and be a part of Bhaitaks whenever we had an opportunity to jam and unwind with friends singing songs from late 50’s to late 70’s which was the golden period in Hindi film music.   Once I retired from active work life I thought of making best use of my time and re ignited my passion by singing in Karaoke and it was at this point,  I got the opportunity to take part in musical show “Seniors Have Talent”. It was such a wonderfully managed show, especially for people on the wrong side of the digital age trying to adjust beautifully to the Virtual singing platform. I was happy to be a part of the contest though I did not figure in the winners list that did not deter me as I thought I did well while  others who did better crossed the  finishing line.

Today I am in a phase where I enjoy my share of reading, watching the games I loved, whether it is Australian open or French open or the busy cricket season it gives me a deep sense of satisfaction.

Additionally, having grown up in difficult circumstances myself, It gives me immense satisfaction when I got an opportunity to make difference to some one’s life and make some meaningful contribution to the society. In the last 2 years post my retirement I have been teaching two underprivileged children, one our domestic help whom I have been teaching for the last 3 years and happy to see her reach her final year of B.com and her cousin in helping him finish his 12th standard.