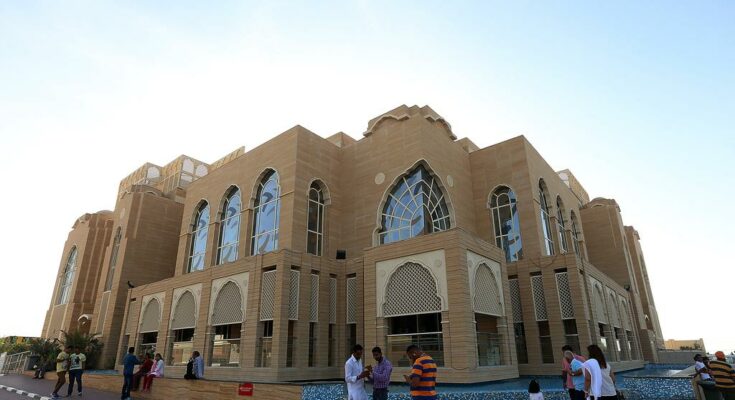 A sip of water, a date. That’s how iftar, the traditional breaking of the fast during the holy month of Ramzan (Ramadan), is heralded. In Dubai this year, that simple act was taken to an even more sublime level by the Guru Nanak Darbar Gurudwara, the only Gurudwara in the UAE. 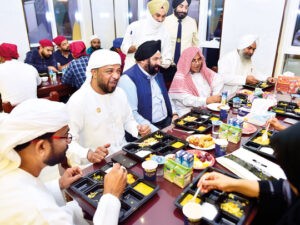 Gurudwaras, the places of worship for the Sikh community, are well known for hosting langars, or community meals, where anyone is welcome to eat. The Gurudwara in Dubai has been holding iftar every year in the month of Ramadan, since the last six years, but this year took it up a notch, by holding iftar on all the days of Ramadan. Some 5000 people from all faiths, mainly Muslim, attend the iftar regularly over the period of Ramadan.

This year, 2019, being the “Year of Tolerance”, Gurudwara Guru Nanak Darbar Dubai decided to host Iftar every single day during the holy month of Ramadan. The year 2019 also marks the 550th birth anniversary of Guru Nanak Dev Ji, the founder of Sikhism and the first of the ten Sikh Gurus. Among his many teachings are humility and respect to all of humanity. Sitting and eating together – regardless of social status or religious belief- is a tradition that emphasises equality and acceptance, says chairman of the Gurudwara, Surender Singh Kandhari.

For the Muslim workers in the Jebel area, where the Gurudwara is situated, there are not a lot of places where they can break their fast, so the Gurudwara had announced that this year it would offer iftar meals to workers every day during Ramadan.

Moreover, during Ramadan the Gurudwara becomes a place of tolerance wherein Muslims and non-Muslims are able to practice their faith– in this way, it embraces the value of tolerance by sharing a meal not only with people from the Sikh congregation but with people from different faiths as well, says Mr Kandhari.

“We are indeed most fortunate that we are in the UAE that not only values harmonious coexistence but also upholds these values to be sustained and echoed to the rest of the world. Guru Nanak Darbar Gurudwara will be spreading Guru Nanak’s message of universal brotherhood, peace and service to humanity through such initiatives every year.”

With food served at the langar being vegetarian, was there any issue about this, considering that part of the traditional iftar spread includes meat? Mr Kandhari, who is the UAE’s Inter-Faith Ambassador, emphasises that the iftar served by them was an “Inter-faith Iftar”, a perfect melange for the UAE’s melting pot of religions – and hence, it did not matter whether it was a vegetarian meal or a non-vegetarian one. The food is prepared according to the highest industry standards, and hygiene levels are maintained and checked periodically. Ingredients are donated by members of the community, and when there are leftovers, volunteers make arrangements to distribute them among workers living in the city. Truly, a community bonding experience.