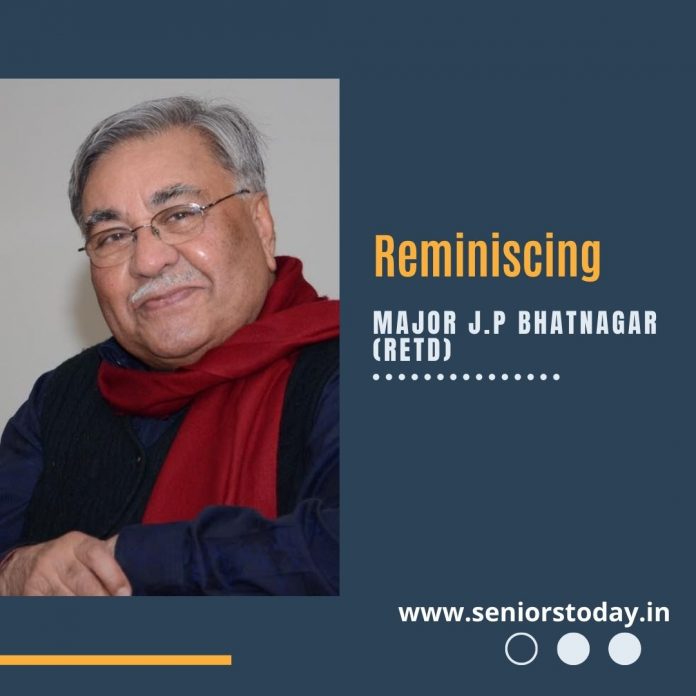 Having been born to an upper middle class family on Vaisakhi day – 13th April 1938 in Lahore in erstwhile Undivided Bharat . A fertile land rich in wealth , culture , passion and emotions and one which had been plundered for decades but where all lived in peace and harmony amongst each other as one undivided Bharat. My land and a birthplace and land for many of my time and era one we belonged to but today we dream of returning to.

The eldest child of a father who was a stellar Sher- E- Lahore – Deputy Commissioner of Police Lahore, his Grandfather an I.G Police Rawalpindi and uncle also in the Police department, soldiers all.  In a period when my world around me was ecstatic and looking forward to breathing in the free air of Independent India.

My world took a nasty turn overnight… in 1947… when this young boy, just eight years old…woke up to chaos and shattered dreams and hopes and in despair having lost his pillar of strength his father to the riots and mayhem of this episode which blackened history forever – Bharat was Divided and shattered the dreams of all , my father Late Shri Baij Nath Bhatnagar was embraced by god almighty into his arms valiantly died saving lives of so many who sought refuge in our home in Lahore.

A displaced life started for that young lad ( JaiPaul , that’s me ) and he had to leave his birthplace with Grandma , Mother, sisters ,cousins and Aunts to a unknown place as a refugee towards Amritsar station. Leaving behind his school mates, street friends, three family houses , he and his parents were escorted by the police officials up to the ladies compartment of train.

The train we boarded was called the  Refugee Train from Lahore to Amritsar . This young boy had seen horrible bloodshed at the station and throughout the day’s journey up to Amritsar station . On both side of our train Dogra Army Jawans were protecting us from rioters , and he suddenly a grown up man overnight was protecting his family including his two older sisters.

These fearless Dogra Jawans keep supplying us few Chikki’s made of chana , mungaphali and water to keep us hydrated and fed. Protecting and guarding us selflessly.

An innate and a very clear desire arose in me to become a soldier just like the Dogra Jawans who so softly were helping us … an ambition arose in a young boy’s mind.  “ That I must join the Fauj to be like this Dogra Jawan. Unsettled in this Partition and after many temporary refugee camps we finally settled in Jalandhar Cantonment and my normal schooling started .

After graduating due to circumstances as a displaced Family I took up a government job and during that period war with China Broke out .

On the National call the recruitment drive for jawans and officers lined up to fight for Nation and family of India.  I joined the Army after resigning my government job and was sent to I.M.A Dehradun to full-fill that child’s hidden desire which was formed out of severe adversity and during the Chaos of partition.

Upon completing my training all gentlemen cadets (GC’s ) were given a Form to fill our choice of Regiment . We have three options of our choice, like Infantry,, Armored corps , Arty, ordinance and Army supply corps.  Well I filled my choice of regiments.

Thus, God willing my Hidden Desire was accepted by GOD and I was given my choice The Dynamic Dogra regiment. I soon joined the oldest Dogra regiment – The 1st Dogra regiment in Nathu La Sikkim facing China border in 1964 . I jumped into the war with the soldiers of the Dogra’s –“ Jai Jawala “

The childhood desire to become a Dogra soldier was full filled by the grace of God and blessings from my Mother to save Mother India.

During 1965 Pakistan started a war and we were in thick of battle with Pakistan and on second day of war reached at the out securest of Lahore,

On that day another ambitious dream , I dared to dream “ to go and visit my ancestral old house at Lahore to reminiscence my childhood and meet my fathers memories who became a Shaheed there and that is something that gnaws in my heart each day as I wake up –

Once a Soldier Always a Soldier and a dogra one at that .