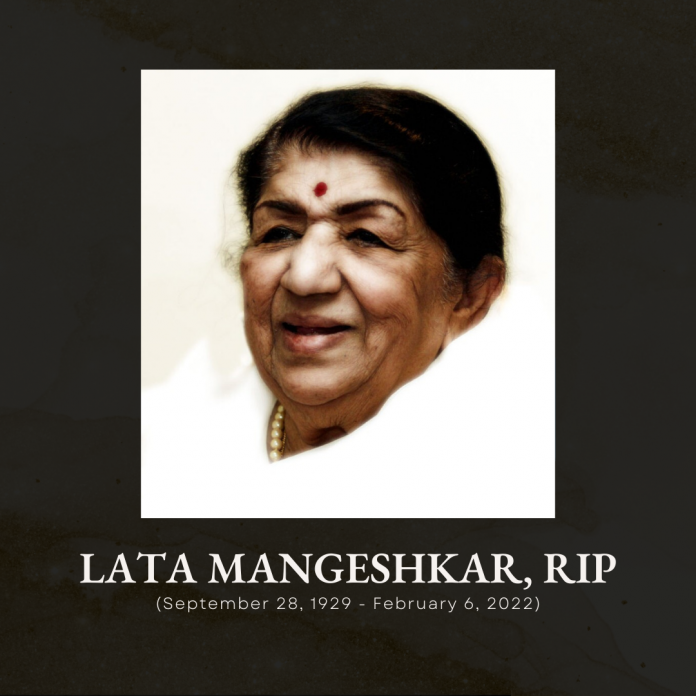 Lata Mangeshkar leaves behind a rich legacy, both in terms of the number of songs and the languages she sang in. After all, the term ‘Nightingale of India’ suited her – and her alone, writes Narendra Kusnur

As a young singer, Lata Mangeshkar loved challenges. The story has it that actor Dilip Kumar once commented on her Maharashtrian accent while singing Hindi film songs. Not to be affected, the singer took lessons in Urdu from a teacher named Shafi. Soon, she delivered the iconic hit ‘Aayega Aanewala’ in the 1949 film Mahal, leaving critics with no chance to complain.

Besides her sheer talent and unique voice, such determination and a quest for perfection set Lata Mangeshkar apart. Today, as the world mourns her demise, thousands look back in admiration at her sheer musical persona. Her voice has inspired numerous upcoming female singers, and her technique has been used as an unwritten schoolbook.

Mangeshkar passed away at Breach Candy Hospital, Mumbai on February 6, leaving behind a zillion memories. Almost every admirer remembers the time they first got hooked on to her music, and various phases they had over the years. Some would talk of the Naushad and C. Ramchandra songs of the 1950s, others of Madan Mohan and S.D. Burman in the 1960s, and others of Laxmikant-Pyarelal and R.D. Burman in the 1970s.

Born in Indore, Madhya Pradesh, on September 28 1929, Mangeshkar was exposed to music through her father Dinanath Mangeshkar. At the age of five she started to work in her father’s musical plays as an actress. After her father passed away in 1942, actor Master Vinayak took care of the family.

Mangeshkar initially sang Marathi songs, and when the family moved to Bombay, she took lessons from Aman Ali Khan of the Bhendi Bazaar gharana. Soon, she was mentored by music director Ghulam Haider. However, the real success came in 1949, with songs like ‘Barsaat Mein’ in Barsaat and ‘Aayega Aanewala’ in Mahal. Ever since, there was no looking back.

The singer was inspired by Noor Jehan in her early days but quickly developed a style of her own. Shamshad Begum and Suraiya were the other popular singers at the time, and later, Geeta Dutt and Mangeshkar’s sister Asha Bhosle became prolific. With hits in Baiju Bawra (‘Mohe Bhool Gaye Sanwariya’) and Anarkali (‘Yeh Zindagi Usi Ki Hai’), Mangeshkar became the most sought-after singer. With the exception of O.P. Nayyar, who never worked with her, she had huge hits with every music director.

Mangeshkar’s success, of course, also led to stories about her rivalry with other singers, including Bhosle. This was something both sisters denied. But she continued to sing hit after hit, even though there were phases when she didn’t work with S.D. Burman and Mohammed Rafi, following differences that were later resolved.

The period between 1950 and 1975 yielded a series of hits. Her songs with Madan Mohan became extremely popular, with ‘Lag Ja Gale’ (Woh Kaun Thi) and the Mera Saaya title track becoming huge radio hits. Her songs with S.D. Burman in Guide and Abhimaan remain fan favourites. Outside of films, she sang the Kavi Pradeep-penned ‘Aye Mere Watan Ke Logon’ as a tribute to Indian soldiers who fought the war against China.

Cut to the 1970s, and R.D. Burman, Laxmikant-Pyarelal and Kalyanji-Anandji gave her some great songs. Khayyam brought out the best in her too, with the Kabhi Kabhie title track, ‘Aap Yoon Faaslon Se’ (Shankar Hussain) and ‘Dikhayee Diye Yoon’ (Bazaar). She was a regular with Yash Chopra films, working with Shiv-Hari and Jatin-Lalit too. Raam-Laxman and A.R. Rahman had some memorable tunes too, besides her brother Hridaynath Mangeshkar who composed many of her Marathi songs too.

Mangeshkar sang many devotional albums too, and her recordings of Ganesh and Meera bhajans are iconic. In ghazals, one of her landmark albums was Sajda with Jagjit Singh in 1991. Her songs ‘Dhuan Banake’ and ‘Dard Se Mera Daaman Bhar De’ are favourites among fans of the genre.

A huge inspiration to many young singers, Mangeshkar leaves behind a rich legacy, both In terms of number of songs and the languages she sang in. After all, the term ‘Nightingale of India’ suited her – and her alone.