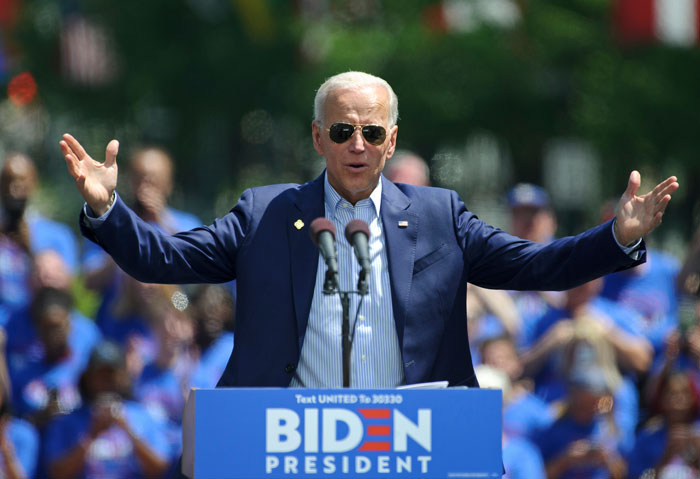 Minoo Shah profiles Joe Biden, the 46th President of the United States and one who is looked to with hope by both Americans and Indians alike

Leadership — and life in general — is an indelicate balance between wisdom and passion, experience and potential, institutions and rebellions. – Photojournalist Melina Mara in The Washington Post, January 12, 2021

For the second time in four years, the United States of America has in office its oldest-ever president — notwithstanding the fiercest election battle that too during a once-in-a-century pandemic that is especially perilous for senior citizens. In the framework of the Journal on Active Aging (www.icaa.cc), what does this mean for our readers who are in the prime of their life? Simply this: Do not live your life with age as a concern.

Joe Biden is living proof of what it means to be 78 years old, in the last quarter of a well-heeled life, with an estimated 95 percent chance of surviving a four-year term. In conclusion — chronological age is not a relevant factor in what can be achieved, at any age.

The adventures of Joseph Robinette Biden Jr, began in 1972 when, as a young liberal from Delaware, he burst onto the political scene and became one of the youngest senators in history to be elected to the US Senate. A rising star, his political fortunes shone bright; however, before taking office he was hit by a personal tragedy. But for the love of country, he would have departed from politics before taking office. In December 1972, Neilia Biden and her three children had been out Christmas shopping when they were broadsided by a tractor trailer. Neilia and 13-month-old Naomi were killed instantly, and Joe’s other two children Hunter and Beau were rescued and hospitalised. And it is in the hospital in January 1973 that Joe Biden was sworn in, by his sons’ bedside. For months afterwards he commuted daily by train from Delaware to Washington DC, so he could be close to his sons.[1]

Now serving as the 46th president of the United States, Joe Biden is a member of the Democratic Party who served as the 47th vice president from 2009 to 2017 under Barack Obama and represented Delaware in the United States Senate from 1973 to 2009. Despite his initial unwillingness to serve, Biden remained in the Senate and public life, turning his grief into a way to connect with others through empathy — a trait that has perhaps most defined his career. And now, even nearly 50 years after the death of his wife and daughter, empathy remains at Joe Biden’s core.

After suffering another personal tragedy while serving as vice president — the loss of his eldest son Beau Biden to glioblastoma at the age of 46 in 2015, Joe Biden addressed the nation, “When you lose a loved one, the ‘firsts’ are always the hardest — the first Christmas, the first birthday, the first anniversary. I know from my experience how little words can mean at such a time, but I know, as hard as it can be to believe, that time does heal. Grieve. There’s a reason to grieve. But there will come a time, remind yourself, just be reminded that the time will come when you’ll think of your husband, wife, son, daughter, mom or dad, and you’ll get a smile to your lips before you get a tear to your eye. That’s how you know you’re going to make it.”[3] These words came from a heart that has weathered storms and created a largesse so very full of empathy.

Joe was born on November 20, 1942 in Scranton, Pennsylvania. He studied at the University of Delaware and Syracuse University College of Law. Several years after losing his first wife Neilia, he married Jill. Dr Jill Biden, who holds a PhD in education and is a lifelong educator, currently teaches at the community college in Northern Virginia. Of his four children Beau (2007-2015) was Delaware’s attorney general who served as a major in the 261st signal brigade of the Delaware National Guard and was deployed to Iraq from 2008 to 2009. Hunter, his other son, is an attorney who manages a private equity firm in Washington DC and is the Chairman of World Food Program USA. Ashley, his daughter, is Director of the Delaware Center for Justice. He has six grandchildren: Natalie Biden, Finnegan Biden, Maisy Biden, Robert Biden II, Naomi Biden, Beau Biden Jr. A family man to the core, he urges his staff not to prioritise work over family obligations, saying if he found out that staffers were working instead of attending a family event, it would “disappoint [him] greatly”.[4]

President Biden has cultivated a profile as Uncle Joe, the aviator-wearing charmer known for the occasional verbal gaffe notwithstanding his sharp knowledge of foreign affairs, his advocacy for victims of sexual assault, and his more recent “cancer moonshot” effort to accelerate a cure for Covid-19. Biden is what you would call an ‘Average Joe’, one who is most comfortable around his two German Shepherds Champ and Major, friends and family. He overcame a childhood stutter, was a high school football star and is a car enthusiast; he still drives the 1967 Corvette Stingray gifted to him by his father. His favourite movie is ‘Chariots of Fire’ and he embodies the message of putting personal fame and glory behind principles.[5] And, best of all, something that both he and I have in common is that we do not drink or smoke, but we love ice cream. It is a known fact that $10,000 was spent during his campaign on ice cream alone, a change from the deviant pleasures of some past politicians.

On the lighter side, Joe is famously known for his gaffes. Once at the White House signing ceremony for Obama’s landmark healthcare bill in 2010, Biden leaned in to embrace Obama and whispered directly into his microphone: “This is a big f***ing deal.” And later brushed it off with a laugh in an NPR interview: “Thank God, my mother wasn’t around to hear.”[6]

What it means for India

On the Indian front, the victory of Joe Biden has put the well-accomplished Bidens of Nagpur, belonging to the Anglo-Indian community, in the spotlight. They have a shared ancestry through a mutual great, great, great, great, great grandfather, John Biden.[7] Leslie Biden of Nagpur had written in 1981 to then Senator Joe Biden (after reading his article titled ‘American Express’ in the Illustrated Weekly of India), and the senator had replied. Unfortunately, Leslie passed away in 1983 and none of the media-shy Bidens subsequently pursued their ancestry, though Joe Biden acknowledged this connection in speeches in Mumbai (2013) and Washington DC (2015).

The Nagpur Bidens prefer to keep a low profile, saying they are doing well in life “by the grace of God”, and don’t wish to make claims of any sort. Their statement said, “The Bidens of India extend their best wishes and God’s blessings to (then president-elect) Joe Biden and hope something good comes our country’s way.”

Which brings us to the question, “What does Joe Biden’s Presidency mean for India?” No one has a crystal ball, but it is safe to say that US-India relations may be more business-like than warm.[8] Pre-election comments are never the essential indicators and the view of the world is remarkably different. This will be true of Biden, the messiah of foreign policy which will be based on multiple considerations — from domestic politics to economic and security issues and evolving security conditions. Having said that, we can be certain that issues will probably be resolved so as not to affect broader ties. This is reflected in the first calls made by the Presidency to the ‘Quad’ member allies Japan, Australia, India, and the Middle East. Particularly, the call to India reaffirmed the US-India alliance. Elevating climate change as a national security concern was amongst the first of the executive orders signed by President Biden after the inauguration.

Noteworthy for Indians should be the delivery on his campaign promise regarding immigrants’ H1B visas, and rescinding the law which disallows H4 visas held by dependents to work in the US. There will be zero tolerance towards terrorism in South Asia, cross-border or otherwise. He also committed to immigration reforms that would allow almost 500,000 undocumented Indian immigrants to become citizens. Also included is his resurrection of the STEM policy which would allow foreign graduates to receive a green card along with their doctoral degree.

It would be safe to say that with Joe Biden as the President, the global forecast is positive. He will make alliances and win back the trust of many a nation that felt unfairly treated in the last four years. He will not play at divisive politics nor condemn economically stretched countries. He will not be that unapproachable leader who rules with an iron fist, but one who will bridge gaps with bonhomie and a gentlemanly stance.

Truth be told, behind every politician is a wise person who helps him steer the course and in Joe Biden’s case it will probably be former President Barack Obama. The pundits that conjecture attribute the pick of Kamala Harris for the Vice Presidency to none other than the Obamas, with Michelle playing an active role in the think tank. There is much to be fixed and President Biden will not waste time on trivialities. The next four years will mend global relations and America will once again gain its rightful place as a world leader.

Such is the resilience of a senior who is defined by a core set of values that do not deter him from his chosen path. In the next few years, an enigmatic Joe Biden will prove that age is but a number and become the poster boy for those of us who dare to dream with a bucket list of wishes remaining to be fulfilled in this, our last lap of a glorious life.