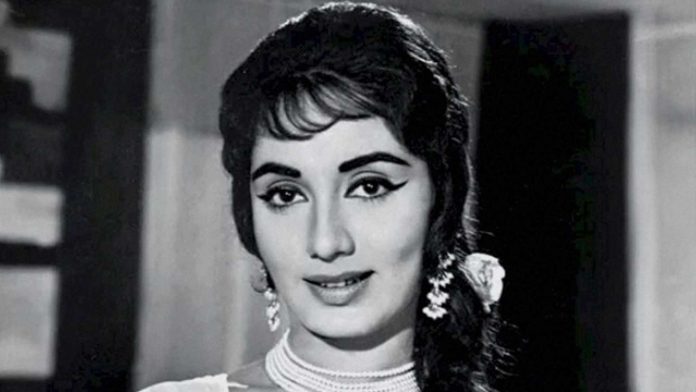 In some cases, since we have selected only one song per film, the other big songs are mentioned within the text. The order is chronological.

This beautiful Sadhna rain song was composed by Salil Chowdhury, with Lata Mangeshkar singing, “O sajna, barkha bahaar aayee, ras ki phuhaar laayee, akhiyon mein pyaar laayee”. Lyrics were by Shailendra, and there was notable use of sitar and flute. The song had been done in Bengali as ‘Na Jeona’.

Written in nazm style by Sahir Ludhianvi, the song was filmed on Dev Anand and Sadhna. Sung by Mohammed Rafi and Asha Bhosle, it was composed by Jaidev in raag Yaman Kalyan. The opening lines were, “Abhi na jaao chhod ke, ki dil abhi bhara nahin”. It was one of the most popular romantic duets of the 1960s.

This wonderful composition by O.P. Nayyar was written by S.H. Bihari. While Rafi sang most of the song to portray Joy Mukherjee, Asha came in during the last antara, though Sadhna appeared all through the song. The opening lines were, “Bahut shukriya, badi meherbani, meri zindagi mein, huzoor aap aaye”.

The film Mera Saaya had two great Lata songs in the title number and “Naino mein badra chhaye’. We chose this song by Asha because Sadhna did a neatly-choreographed folk dance in a crowd setting. Madan Mohan created a typically north Indian tune, with Raja Mehdi Ali Khan writing, “Jhumka gira re, Bareilly ke bazaar mein jhumka gira re”. The percussion is the song’s highlight.

Both Lata and Asha sang consistently for Sadhna and both suited her persona, with the latter having some great duets with Rafi. But Sadhna’s image also went well with Suman Kalyanpur, and the song ‘Pehla Pehla Pyaar Hai’ from Budtameez was admired by fans. Indeed, she was a singer’s delight.