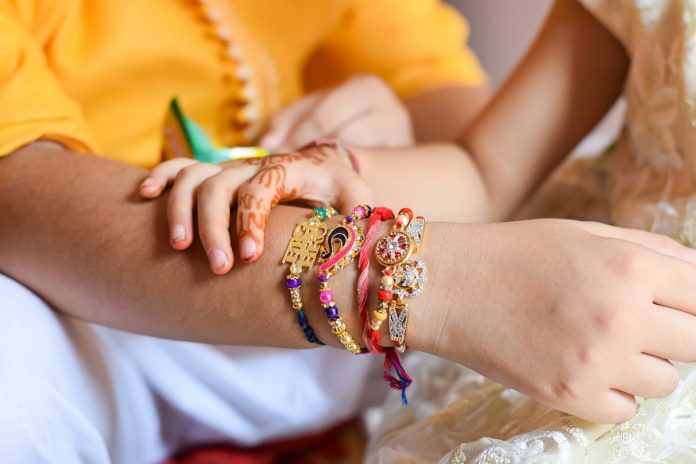 What is it about Raksha Bandhan that makes it the most adorable of all things siblingly traditional? For me it would mean going down decades to a childhood spent with five close four extended and numerous on the periphery who became Rakhi brothers.

As a young lass before I reached my teens the allure was mithai and a new dress.  In my teens, it was all about negotiation.  You go, whaaaat?  Yes, negotiating the returns of tying a Rakhi to my brothers.  This may be true of almost any Banya family or maybe not but in our family unbeknownst to the elders there was a strategic alliance going on behind the scenes.  So here’s a bit of an insight into Raksha Bandhans of my teens.

All the brothers got a certain amount of money to give to their sisters (you know the rules).  Well, the younger ones divided the 100 odd rupees and gave each of the sisters a fair and square share.  The middle brothers came up to us and said how about we all use the money for a movie and snacks.   Fair enough, they got a colored thread on their right hand and we got escorts for a night out in the town (because back in the day as girls we were not allowed to go out without chaperones).  The oldest brothers who were already in high school had turned this day into an art form.  The previous night they would approach us individually and ask how much of the loot we were willing to share with them.  (The throes of bribery reach deep). The negotiations stalled when at least one person screamed they were going to tell the parents.  This person was condemned, scowled at and forever sent to Coventry and on the auspicious day the snitch sister was given a wad of Monopoly money. Suspicious or not, she dare not check the authenticity as that would certainly earn her an ominous glare from a watchful Fiya, Maasi or Kaki. Those that agreed to a 50/50 partnership were bestowed a smile and became a part of the inner circle, meaning they would be sneaked into parties wearing mini skirts and lipstick.  I leave it to your imagination about where I made the cut.

After we sisters were married, the whole transaction turned 180 degrees with dialogues like ‘tujhe ees Rakhi ki Kasam’ with ‘bhaiyya mere…’ type of melodies in the background and a bundle of rupees escaping from each brother’s hand onto the Aarti thali.

Now that we are in our golden years, we laugh about what could be termed as ‘omg – you did not really, etc.’; but the way I look at it, sharing these memories with the multiple generations that abound this annual celebration are what makes this day precious.  I am thinking the vicious circle will continue in our family as the youngsters put an enhanced creative spin and build upon the foundation that our generation laid down.