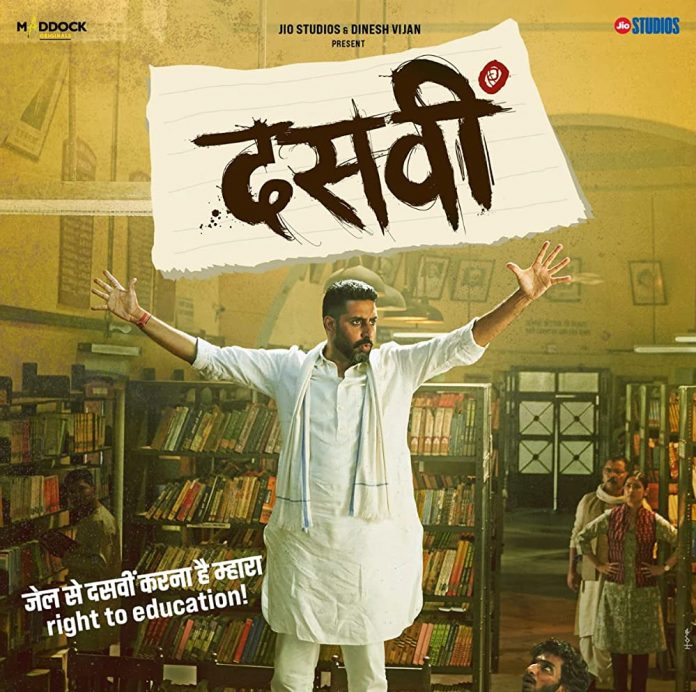 A barely literate but corrupt politician is arrested by a conscientious cop, then decided to complete his school education in jail; his wife who was meant to hold his CM’s seat for him acquires political ambitions of her own. Set in a fictional state, the film is a thinly disguised lampoon of a few real-life netas from North India, writes Deepa Gahlot

Harit Pradesh could stand in for any North Indian state, where uneducated and corrupt politicians rule, and amass a great number of followers, for whom showmanship and oratory are more important than good governance. So, when Ganga Ram Chaudhary (Abhishek Bachchan), chief minister of this state is introduced, he is making a fitness video.

His swagger is dimmed only a little when he is convicted for fraud, because he does not take the court’s verdict seriously. Followed by slogan chanting fans, he insists that the prison gates be opened completely for him, because he will not bend and go in through the small wicket gate. His CM’s seat is to be kept safe by the appointment of his timid, rustic wife Bimla (Nimrat Kaur). The jail staff is obsequious and offer him every comfort, till the new superintendent arrives—Jyoti Deswal (Yami Gautam Dhar) is not in the least cowed by his power. His privileges are immediately withdrawn and he is put to work like an ordinary inmate.

As he struggles behind bars, his wife acquires all the airs and graces of a politician and starts to enjoy the perks of the CM’s chair.  On a challenge, Ganga Ram declares that he will pass his tenth standard exam while in jail.

The gleaming clean prison that has a well-stocked library and inmates who are all well-scrubbed and obedient as school kids under a strict principal could only exist in a fictional Indian town.

Ganga Ram finds the most unlikely teachers among other prisoners—the dwarf Ghanti (Arun Kushwaha) who is a maths wiz, the erudite librarian Rae Bareilly (Danish Husain), a science teacher, Imandar (Rohit Tiwari)—but he is stumped by Hindi, and discovers that he is dyslexic.

There was a lot of potential for humour as the arrogance of the politician is gradually cut down, but the director, Tushar Jalota) gets sidetracked into adding historical sequences in which Ganga Ram appears like Forrest Gump, and having alphabets fly in and out of books.

Meanwhile, Bimla Devi acquires a spiffy wardrobe and goes about putting up statues and posing in staged photo-ops, now in no mood to vacate the CM’s seat for her husband.  With his newly acquired knowledge, Ganga Ram becomes a vocal evangelist for education.

The actors look like they are enjoying their interactions, so even with its missed opportunities, Dasvi (which should correctly be spelt Dasvin) has a warm vibe that may miss the Munnabhai level by miles, but makes for mildly amusing home viewing.