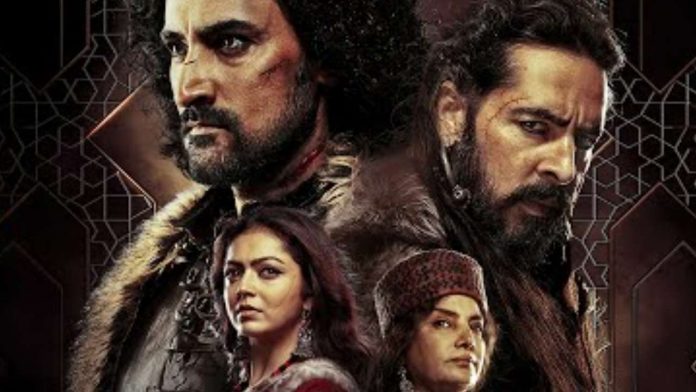 The first season of Disney+Hotstar’s new show is the story of the rise of a teenage Babur from taking over the rule of Ferghana after the death of his father, to his conquest of India and his funding of the Mughal Dynasty.

The show made on a grand scale has been co-produced by Nikkul Advani, directed by  Mitakshara Kumar. Kunal Kapoor, Shabana Azmi, Dino Morea, Drashti Dhami, Aditya Seal, Rahul Dev, Sahher Bambba head the cast. The low down by Deepa Gahlot

It was only a matter of time that the popular swords-and-sandals epic Game Of Thrones, got an Indian rip-off, only The Empire is historical fiction. Based on Raiders Of The North, the first of Alex Rutherford’s Empire Of The Moghul books, the eight episodes in Season 1 tells the story of Babur from his youth in Ferghana to his founding of the Mughal Dynasty in India.

A teenage Babur (Mehroos Mir) has inherited his poetry-loving father’s gentleness, but is also trained by the loyal commander Wazir Khan (Rahul Dev) to be a fierce warrior. His imperious grandmother Esan Dawlat (Shabana Azmi) keeps reminding him of his destiny to ascend the throne, be  a worthy emperor, and also get back the lands given away by his father or captured by the evil warlord Shaibat Khan (Dino Morea.)

In the first two episodes, it has been established that the grown-up Babur is Kunal Kapoor, who is in battle with Ibrahim Lodhi (Aashit Chatterjee). Flashback to Ferghana and Samarkand, where Babur has to deal with palace intrigues set off by wily courtiers (they always look shifty) and his father’s “concubine” (Kalliroi Tziafeta—with an odd accent), who wants her son on the throne.

Shot beautifully on grand sets with lovely costumes, the series, co-written (with Bhavani Iyer), and directed by Mitakshara Kumar, is still more Sanjay Leela Bhansali– whom she assisted on a few films– than Sohrab Modi (the undisputed master of historicals). Dino Morea even plays the bloodthirsty, swaggering Shaibat Khan in a campy style, like Ranveer Singh’s Khilji in Padmaavat.

In spite of its absurdities, ordinary VFX, stagey dialogue (by Kumar and AM Turaz and excessive gore, the series is watchable, simply because an epic on this scale has not been attempted in the Indian OTT industry before. The casting director herded every actor who could speak Urdu—Aditya Seal, Drashti Dhami, Imaad Shah, Sahher Bambba appear later in the show.

Get past the first two back-and-forth episodes, and the series settles down to let the story flow and even though history is liberally sprinkled with imagination. More that the slash-and-chop battle sequences, it is the calmer emotional moments that work better.

An actress like Shabana Azmi, with her clear, ringing voice, and regal bearing, easily overpowers all the others in the frame with her, and shows that women may not have had real power in those times, but they often pulled the strings.

There are six books in the series by Rutherford (the pen name of Diana and Michel Preston), so more seasons are likely to be produced, which will hopefully learn from the flaws of this one.