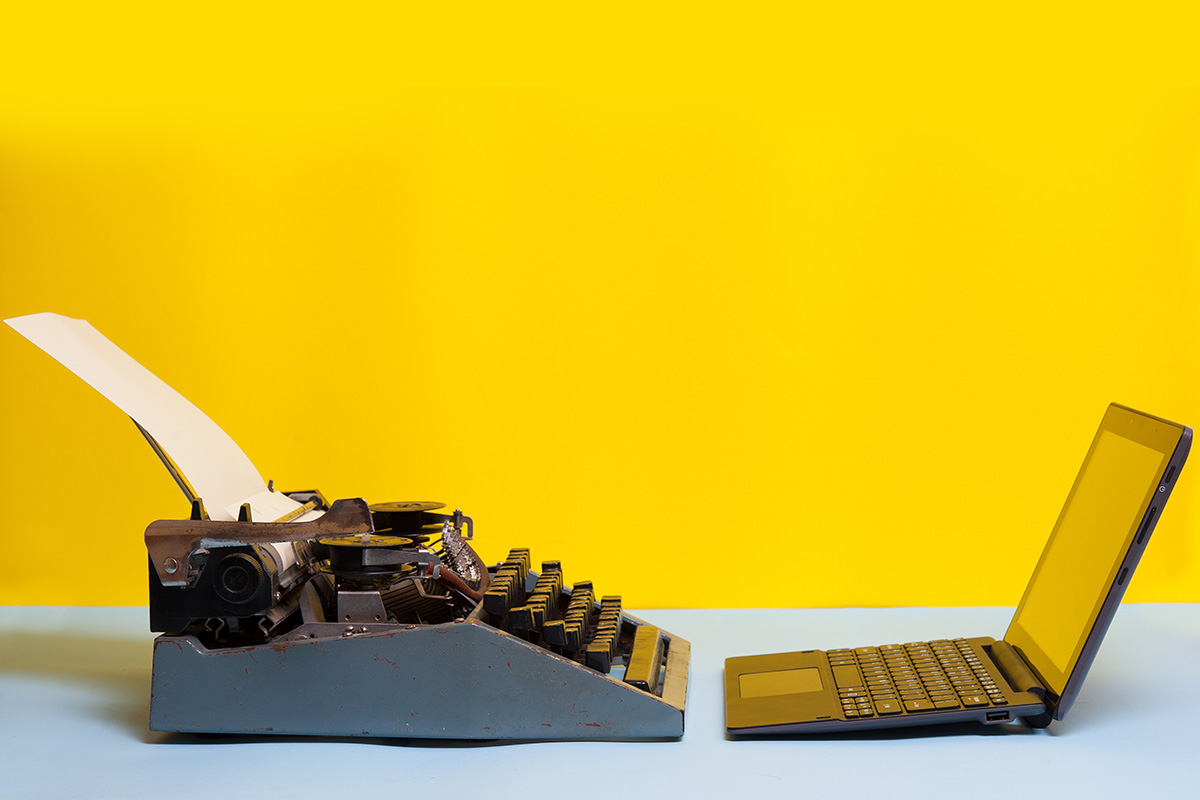 Nagesh Alai casts a wry but loving lookback at the evolution of calling, writing and listening to music

It’s the 13th September as I write this. It happens to be the 13th birthday of my lovely niece, who is multi-talented and on top of technology and trends.  Not surprisingly, I got a Zoom invite from her to attend her virtual birthday party at 4pm. Lockdown may be tough on most, but technology has been clearly an enabler during the topical challenging and distancing times. Staying connected we all are, distancing notwithstanding. True to the trend of the day, my birthday wishes to her elicit a cryptic “tysm” response – it took me a while to realise that it means “thank you so much”. A wisp of a girl who can normally talk thirteen to the dozen when just 12, and hold everybody spellbound, is going to be the cynosure later today on Zoom, I am pretty sure.

I wistfully remember my growing up days and recall the enjoyable but inevitable ride of the obsolescence of the old and the discovery of new technology over decades since I stepped out into the real world from school.

I started working at the age of 16 with my father, a practising chartered accountant, immediately after matriculating (passing out of 11th SSC of those days). His office was right behind the Bombay Stock Exchange and our window overlooked the trading hall, now a relic (during trading hours we could hear the shout and din of bids and buys of the brokers with signs and gesticulating fingers – which only the traders could make sense of, but accurately reflected the trades in the contract notes). As a typical office accoutrement, we had an Olivetti followed by a Remington Rand typewriter.

The office secretary was a proficient typist and a stenographer. I used to be amazed at her speed in writing shorthand while my father rapid-fired his dictation for case studies and tax petitions, followed by the shorthand notes getting converted into typed drafts. Speed was the essence and it was so musical hearing the rat-a-tat-a-pat hitting of the key pads and the typefaces on to the paper and the turning and returning of the roller line after line, interspersed with the shifting of the keys to highlight words/sentences in red. Given her speed, making changes to the draft and finalising it, though tedious, was fairly manageable. The stacking of papers, inserting them into the roller interspersed with the carbon paper for copies (without smudging your fingers), changing of the Kores (does anybody remember the famous name of yore, it has still managed to survive by reinventing itself) ribbon spool which used to come in a cute square plastic case, the cleaning of the typefaces, the roller and everything else in the typewriter monthly were all efficiency metrics in those days, which technology of today has made it a breeze with a simple scan or digital version. The electronic typewriters (like Godrej, IBM, etc.) were an improvement for a brief spell before the advent of computers in the mid 1980s. Learning typing in those days was seen as a sign of efficiency and self dependency. I, and so did all my siblings, used to go to typewriting classes and became proficient in it. A high typewriting speed was seen as a virtue in a prospective recruit. I used to practice in office with one finger initially (and in the bargain getting smirked at as ‘ekbote’ or ‘one-fingered’) but eventually became a proficient typist good enough for a job and gloating on being the fastest typist in the draw. WFH was nothing new, we used to work at home on Sundays too, ably aided by a compact version of the Underwood typewriter.

Getting a phone connection in those days was a minor victory and getting a preferred colour other than the black one was a major victory, coming as it did after years of wait. Rotary dial phones are rare to come by these days and are cherished as antiques. We had a black one initially and getting more colours was like a mini opening of the economy! The charm of dialling and the sound of the whirring rotary dial while looking at the number in the phone book or directory (running into hundreds of pages with alphabetically placed names and hundreds of yellow pages selling everything from pen to panacea – was the most referred tome at homes and offices) was an event itself with more than one person milling around the dialler to speak to the dialled. All that has gradually given way to calling and patching in people into a group call over a cell phone with numbers getting easily accessed from the contact list or the net. I had retained a set of the voluminous telephone directories for quite a many years before giving them away to the raddiwala – who well could have been purveyors of consumer data in the past, that is so easily sold today by the FANGs and the likes where we socialise virtually today.

Get the fax right

My first foray into the corporate world in early 1980s exposed me to telex and teleprinters and fax machines. Our company, a multinational pharmaceutical company, was housed in a heritage building in the heritage precincts of Ballard Pier. Business reporting to overseas used to be done via telex for the top-line views and the detailed ones through snail mail. When the fax machines came in mid-1980s, given the high costs initially and the long lead time to procure phone lines, the canny ones opened shops to facilitate faxing facility by charging per page (used to be Rs 12 to 15 per page) and we used to send our office help over to these shops to fax the business information running into several pages and analyses. Overtime, the prices levelled and almost every company had a fax machine and the dedicated fax line. The visiting cards of those days used to have the telephone, the fax and the telex numbers as necessary information. Several brands like Ricoh, Canon, ICIM etc. used to proliferate those days. Like most others, fax machines too have been webbed out by technology.

Working as I was in the Fort Heritage precincts, I used to amble down to Kala Ghoda (the eponymous black statue of the royalty on horse was imposing, before it was relegated out of sight to the grounds of the zoo in Byculla). One of the must-visits was Rhythm House which used to sell music records (or vinyls) – English, Hindi, Marathi, Tamil et al. They used to have lovely cubicles or listening rooms where you could play the records and hear the music in solitude and with headphones before deciding to buy – the Curmally family (promoters) were ahead of the times in experiential marketing, if I were to observe. It was a delight to scour, select and hear the the various duration and mixes of music on LP (long play) and EP (extended play) vinyls with RPMs (rotation per minute) speeds of 33 & 1/3, 45 and 78. They all used to come in cardboard sleeves with clear descriptions and list of the music. HMV was a famous brand of record players and vinyls those days. Many may remember its iconic logo of a dog listening to the record being played (today it has morphed into Saregama, if I am not mistaken). Overtime technology developed and purveyed music in the form of cassettes (does anyone remember using a pencil to untangle or tighten the cassette spool?) to CDs to iPods to YouTube to the smartphones and along with it perished memories and landmarks like the Rhythm House. The building stands at Kala Ghoda even today and it is a melancholic joy to see its exterior walls in stark blue and yellow. I had last bought a CD from that shop in early 2016, post a mandatory fortnightly visit to the museum and Jehangir Art Gallery. The business of the House collapsed due to technology, but its Rhythm stays on in our mind space. I do hope that the venerable chief of Mahindra Group (which sponsored and started the Blues Jazz music festival over a decade ago at Bandra Mehboob Studios) walks his talk of reinventing Rhythm House and making it a cultural hub. Hopefully, it will make a compelling offer to the enforcement directorate which is auctioning off the properties of the finagling Nirav Mody (he had bought it off the Curmally family to have his flagship store before he got discovered).

There is so much to write about how technology has inexorably ‘dado’ed so many things that form a part of our cherished memories. The beauty of a fountain pen and filling it up with ink or suctioning ink with its plunger are inalienable part of our memories, schools and growing up. I remember having so many pens – a Hero (Chinese made) a Pelikan, a Pilot, a Waterman and so many others. I used to clean them every week and keep them in working condition. Ah, the joy of writing with a fountain pen is something out of the world. I had a decent handwriting – more print than cursive – and used to enjoy writing regularly just for the fun of it. Ball point pens put paid to all of that joy. And computers and laptops and cell phones killed not just the joy of writing, but the the more important ability to write. And with it, the ability to hold something steadily in our hands – the prehensile capacities have reduced to arthritic levels in many cases. The bulky table top computers and screens have given way to sleeker and cheaper laptops. Technology will soon even make these laptops pliable and foldable and rollable for ease of carrying. Smartphones have made its ubiquity and utility all pervasive and wfh (work from home) or wfa (work from anywhere) a dream rather than a nightmare. Single screen theatres to multi screens to Cable to DTH to OTTS may soon give way to projections on the surfaces of our choice with a single device, demolishing brick and mortar and cables and televisions et al. The list is endless really – from every aspect of our lives.

I wish I had written this article with my fountain pen on a piece of paper and edited and finalise (I still have many of my old fountain pens, besides the Mont Blancs and Namikis of the world), but the fact is that I just cannot – I have become too adoptive and adaptive to technology – and therein lies the contradiction between the wistfulness and the virtuality. It will not be long before technology enables me to project my thoughts on to my cellphone screen and I don’t even have to type in anything. If that happens, and I guess it will, technology will be able to read our minds too soon. We may then have a utopian technology, but likely a dystopian society. Therein lies the thrill and danger of the inexorable technology leaps and rides.