Seniors Have Talent: The winners of Season 6 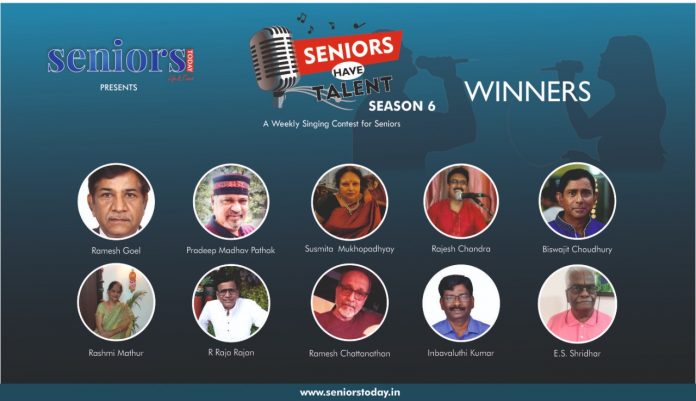 At the Seniors Have Talent Season 6 Finale held on Sunday, January 23, 10 of the 23 finalists who participated were adjudged winners as per the scores of the six jury members.

The Season Finale of Seniors Have Talent Season 6 was held on Sunday, January 23. Participants were required to sing from one of the following 10 alphabets, that were to be assigned to them by one of the six judges: Sa, Ra, Ma, Na, Cha, Ka, Ha, Pa, Ta, La

She started learning music when she was eight. Music is her passion and she’s currently teaching vocal music online and her students are mostly seniors from different part of India. Other than singing, she likes Gardening.

He lives in Pune and has a great passion for singing. He is a huge fan of Kishore Kumar.

He is head of the department at the Deep Memorial Public School, Ghaziabad. He has 25 years of experience in singing now a days he takes online classes. He plays the Tabla, Keyboard, Harmonium and Congo.

He is a retired government employee and for him music is his soul and first love. He is a Tabla Player and his hobbies are Tourism & Photography.

She was associated with All India Radio and Doordashan Lucknow. Later, she was also a part of Doordarshan Delhi. Music is like soul to her being. Her other interests are theatre, especially Urdu plays, Poetry and Reading Novels.

He retired from the central government and is very fond of music. Music, he says, is his breadth and it relieves his stress

He served in the Indian Airforce, Zee TV, HSBC etc. Music is his passion. He is an ardent book reader.

He is a retired electronics engineer from ONGC from Mumbai, now settled in Chennai. Other than singing, he likes playing Basketball and Badminton.

He graduated in Electrical Engineering. Presently director of a company called Kido Enterprises Pvt Ltd. His other interests are solving cryptic crosswords, solving SuDoKu puzzles, reading about philosophy and astrophysics.

Box at the end of the story

Sudha Dave was born and brought up in Chennai and is a retired teacher. She has given many stage programmes right from her childhood. She can play the harmonium and the sitar. Music is her passion and a stress-reliever too.

She is a former employee of the Income Tax department. She reached up to the World Championship level in Table Tennis. She loves adventure and nature. Trekking is her passion and she has witnessed miracles which gave a kick to her spiritual journey. For the last two years she faced a storm on the health front. This, she says, taught her many lessons and she believes a winning and happy mindset can change anything in a human body.

He is an extremely passionate about music with fondness for Ghazals. He learnt to play the udangam during his early years. His great grandfather was an accomplished violin exponent and teacher in Mumbai. Our judge today normally lives in Hong Kong but is, as we speak, at home in Mumbai.

Kailash Balani has been in the publishing industry since 1974 and manages them with much success. He served as President of the Federation of Publishers’ and Booksellers’ Associations in India from 2010-2012. With his family, he has also established the ‘Global Music Institute’ at Greater Noida.

He is a postgraduate diploma in Textile Chemistry and Processing. He has had 15 albu released so far and has lent his voice as a playback singer in seven Punjabi fil. He has more than 500 awards to his credit, including, if we may add, Seniors Today Singing Superstar Award for Season 3.

She has been in the education sector as an Educator, Curriculum Designer and a Consultant for almost thirty years. Music has been an integral part of her life She also composes rhymes for toddlers and Pre-Schoolers. She hopes to contribute more such meaningful concepts and programmes for the young ones.

Seniors Have Talent will now return with Season 7, on Sunday, February 27, 2022. The entries are open at https://seniorstoday.in/seniors-have-talent. There is no fee to register and send the video for selection. However, once selected, contestants will be required to pay a nominal Contribution amount of Rs 500. Details for the online payment of the same will be shared with all selected contestants.

Seniors Have Talent: The winners of season 7

Seniors Have Talent: The finalists of Season 7