An uncomfortable feeling, ranging from a prick or tingle to a severe throbbing or pulsating sensation. Everyone suffers from it due to some reason, which could be very mild, or an indication of a deeper illness.

We often tend to ignore the aches and pains in our body, though it’s our nervous systems way of signaling that something is wrong. Most people will try home remedies, like in ice pack, oil massages, and poultice.  There are, however, a few conditions, which definitely shouldn’t be ignored.

So, what could the pain indicate? It depends on the body part affected, and the reasons could be as simple as a sprain. It could also be a more severe condition, requiring extensive checkups and treatment.

A sudden, unbearable pain in the right lower side of the abdomen could be appendicitis, an infection in the appendix. It can be accompanied by nausea and vomiting.

Pains in the upper right abdomen, increasing in intensity gradually, can be indicative of gall stones. It is usually accompanied by indigestion, nausea, a sensation of heaviness in the abdomen. In extreme cases, the gall bladder ruptures, making it an emergency.

A sharp shooting pain starting from the back and radiating forwards could be due to renal calculi. The pain typically occurs when the stone moves from its position; it could be accompanied by bleeding in urine. 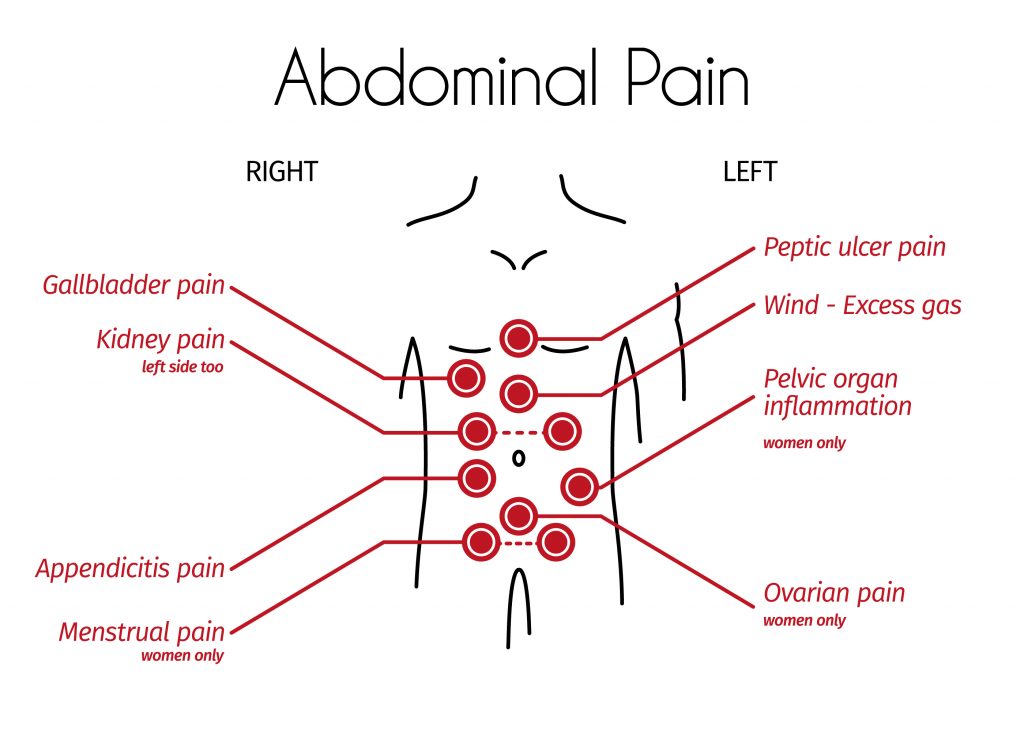 A pain in the lower abdomen could be due to urinary infection or an intestinal disease, like obstruction.

We usually associate chest pain with a cardiac eventuality. However, there can be other reasons for experiencing pain in the chest region.

A pneumothorax – air or gas in the chest cavity- can also present with similar symptoms.

Backache is one of the most common pains people experience. We usually tend to either ignore them or take them in stride. But at times, they need to be taken seriously.

The causes could be mechanical (due to injury, muscle strain) or radicular (a pinched nerve, with the pain radiating along its path)

One of the more critical reasons for upper backache can be aortic dissection- a condition in which there is a tear in the aorta, causing an internal bleed

Though not common, the pain could also be a symptom of spinal tumors.

Sub-acute : persists from 6 weeks to 3 months, and it may require investigations and medical intervention.

Chronic : Lasting over 3 months, this pain can be moderate to severe and may not respond to treatments, requiring medical and/ or surgical intervention. 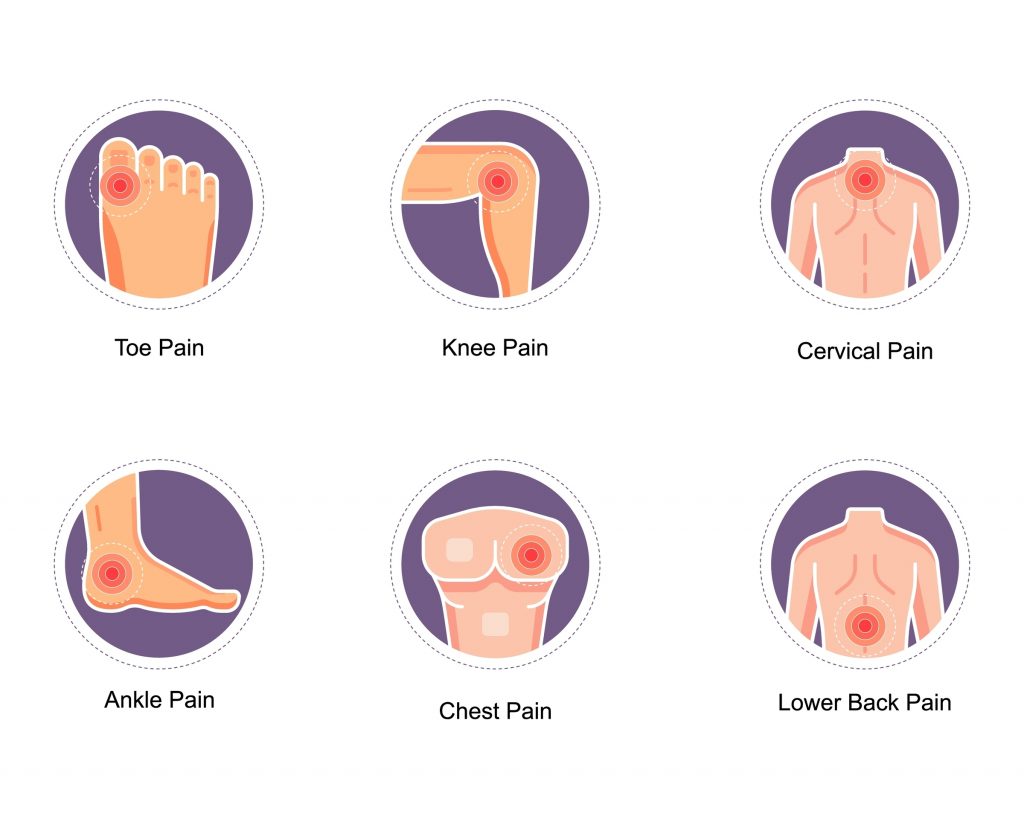 Most of us have suffered through a headache at some time orb the other. There are a lot of reasons for a headache- stress, hypertension, fever, to name a few.

A brain tumor also gives rise to headaches, which are aggravated at night, while sleeping or just after waking up. Sneezing or coughing can aggravate these headaches too.

Eye pain is usually the result of an injury- a foreign particle in the eye, wearing lenses for a long time. But there are certain conditions giving rise to deeper, more severe issues.

Ocular pain is more superficial, caused by rubbing the eye or presence of a foreign object. It is often accompanied by burning or itching.  Washing the eye and anti-allergic eye drops usually give relief.

Orbital pain is more severe, could be shooting or gritty. It requires a closer investigation and treatment. Some of the causes of orbital pain are:

Jaw pain is not only common, but also debilitating, as it hinders the ability to chew and swallow food. The causes can be infections, tooth cavities, TMJ disorders. It can also be a sign of a heart attack, with the pain radiating from the chest to the jaw. 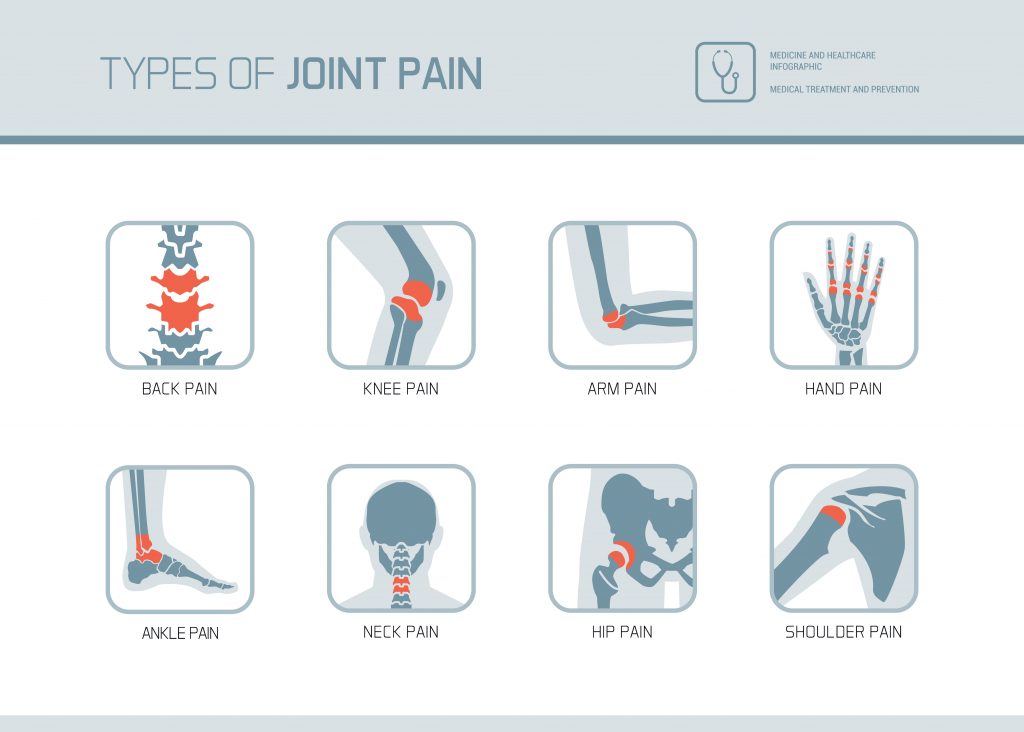 Bone pains are fairly common, especially as one ages. They are described as severe, deep seated pains, often aggravated at night. The causes are many- injury, Calcium and Vit D3 deficiency, and osteoporosis. However, it is also one of the signs of bone cancer. Any unexplained bone pains should be thoroughly investigated.

Joint pains are usually experienced by elders, due to wear and tear of the muscles and tendons holding the joint together. Dislocations, injuries, fractures can also cause joint pains.

Degenerative changes are commonly seen in the hip or knee joints, with the cartilage between the bones breaking down. These are slowly progressing conditions, accompanied with stiffness of joints, and difficulty in using them. Advanced cases have to undergo surgical replacement of joints.

An auto immune condition, this is characterized by pain, inflammation and joint stiffness, especially in the mornings. The person could also suffer from fever, fatigue and weight loss.

Heel pains are often felt due to ill-fitting footwear or pressure on the heels for an extended period of time, such as standing or walking for a long time. The other reasons are:

Calf pains can be a result of exertion or strain. However, a severe, sudden pain in the calf can be due to a condition called DVT (deep vein thrombosis), formation of clots in the deep veins of the calves. These clots can travel anywhere in the body, and prove dangerous. There is usually a history of immobility due to bedrest or long travel times. It could be accompanied by hyperpigmentation of the calf skin; it may also feel hot to the touch.

Pain in the toe can be quite annoying, and at times cause difficulty in walking. Fractures, in growing toenails, stubbing can all cause this pain. Systemic illnesses such as gout are known to affect the big toe, with severe, intolerable pain, swelling and tenderness.

Painful urination generally makes people think of a urinary tract infection, treated with anti-biotics. However, it could also be a sign of prostate or bladder cancer. A recurrent pain while urinating should be brought to the attention of a physician. Also, keep an eye out for bleeding, weight loss, reduced appetite- they all could point toward a serious illness.

A sharp, intolerable pain, usually one sided, can be indicative of testicular torsion, a condition in which the blood flow to the testes is cut off. It is an emergency, and the individual should be rushed to the hospital. If ignored, the reduced blood flow will cause damage to the testicles.

Other causes are injury, infections or testicular cancers, but the pain in these cases is either temporary or of gradual ascent.

The neck is one of the most common areas for pain and stiffness. Bearing the weight of the head, the neck is vulnerable to pain due to injuries, and can result in restricted movements.

Heaviness and mild pain in the breast tissue is a common symptom of premenstrual syndrome- many women suffer through it on a monthly basis. Unfortunately, breast cancer can also present with similar symptoms; it’s often difficult to differentiate between the two on clinical history alone. It’s better to get yourself investigated to reach a conclusive diagnosis. If you feel hardness or a lump, with pain or even without, then you definitely need to meet your physician.

Pains due to wounds

These are usually temporary and will disappear within a few days, at the most. However, if it doesn’t, and is accompanied by swelling and /or oozing from the wound, it could indicate an infection, requiring antibiotics. Diabetics, in particular, need to be careful, as the healing process is impeded by the high sugar levels.

Though it’s true that most pains are usually treatable with home remedies and rest, it’s always better to be vigilant and informed. Timely medical intervention can help prevent extended illnesses and morbidities.