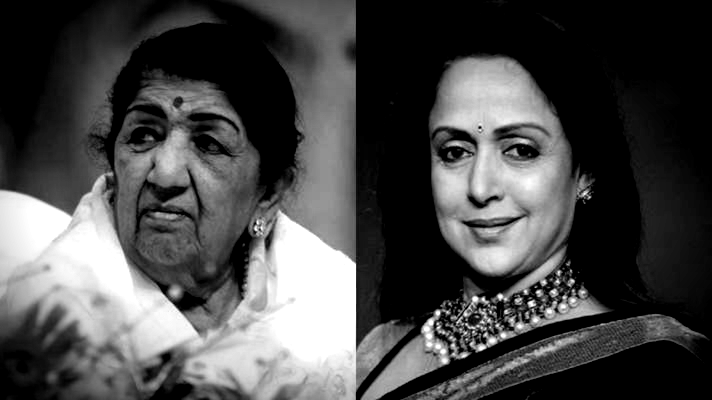 It’s as if her voice was made for Hema Malini. On the occasion of her birthday on October 16, Narendra Kusnur picks 10 songs that Lata Mangeshkar rendered for the superstar

Dream Girl Hema Malini had some great songs filmed on her through the 1970s and into the first half of the following decade. Interestingly, a sizeable chunk of her solo songs were sung by Lata Mangeshkar.

To celebrate Hema’s birthday on October 16, we choose 10 songs sung by the nightingale, whose voice seemed to be made for the actress. A rare exception one can think of where another singer took over was the film Meera, where composer Ravi Shankar opted for Vani Jairam’s voice. This list of Mangeshkar gems is chronological.

Sung by Mangeshkar and composed by S.D. Burman, this song was all about hope with Anand Bakshi writing, “Aaj nahin toh kal mehkegi khwabon ki mehfil” and “Naya zamana aayega”. The song was filmed on Hema and Dharmendra.

Coming towards the end of the blockbuster film, it had Basanti (Hema) dancing in Gabbar Singh’s (Amjad Khan) den, as a tied-up Veeru (Dharmendra) watched helplessly. Music was by R.D. Burman and lyrics were by Bakshi.

One more from the R.D. Burman-Gulzar combination, this one shone with the lines “Ab ke na saawan barse, ab ke baras to barsegi akhiyaan”. Mangeshkar’s singing was filled with pathos and the picturisation on Hema was perfect.

The song was filmed on Hema and Amitabh Bachchan in a five-star hotel setting. Some felt it was different from Mangeshkar’s regular style because of its pop nature, but the rendition was perfect. Music was by Laxmikant-Pyarelal and lyrics were by Bakshi.

Though the film was known more for Kishore’s ‘Humein Tumse Pyar Kitna’, the Mangeshkar solo ‘Tu Ne O Rangeele’ was popular too. Composed by R.D. Burman with words by Majrooh Sultanpuri, it had Hema and Rajesh Khanna in the lead.

A gem from music director Khayyam, sung beautifully by Mangeshkar. Jan Nisar Akhtar wrote, “Aye dil-e-nadaan, aye dil-e-nadaan, arzoo kya hai, justajoo kya hai”. The film was based on the life of the only female Sultan of Delhi and her relationship with a slave.