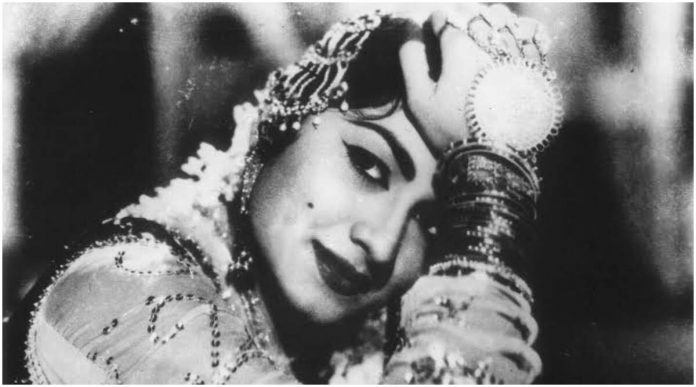 On October 23, actress Minoo Mumtaz passed away, leaving behind a string of memories for followers of old Hindi films. As a dancer, and then as a character actress, she had created an impact in many short but significant roles.

A lot of wonderful songs were also picturised on her, mainly featuring her dance performances or her comic appearances. Here we choose 10 such songs, and mention a few more notable ones at the end. The order is chronological.

Minoo was comedian Mehmood’s sister. She was 79, and breathed her last in Brampton, Canada.

Once again, there was excellent coordination as Minoo and Kumkum did a dance duet. Vocals were by Asha and Shamshad, with Nayyar composing the music with a Punjabi folk touch. Lyricist Sahir Ludhianvi wrote, “Reshmi salwar kurta jaali ka, roop saha na jaaye nakhrewaali ka”. Dilip Kumar made an appearance too.

Though the focus of this song was Johnny Walker, and it was a Mohammed Rafi solo, Minoo came up with a fantastic performance, doing a western dance jig. Her facial expressions were amazing too. Music was by Nayyar and lyrics were by Qamar Jalalabadi. The pair was also fabulous on ‘Dekho Ji Dekho’, penned by Jan Nisar Akhtar.

This song was an example of her comic timing, as Minoo was paired opposite Agha. Madan Mohan created the tune, with Majrooh Sultanpuri writing, “Yeh cycle ka chakkar, kabhi aage kabhi peeche”. Asha and Rafi sang this duet which used a bicycle as a metaphor for different situations.

While these 10 songs were representative of Minoo’s abilities as a performer, there were others where her dancing brilliance came to the fore. Examples were ‘Dhake Ki Malmal Maangna Balam Ji’ in Dushman, ‘Jaa Re Jaa Re’ in Duniya Na Maane and ‘Bedardi Mere Saiyyan’ in Chaudhvin Ka Chand and ‘Tumhari Kasam Tum Bahut Yaad Aaye’ in Gaban. While Asha sang the first three songs, Lata sang the last one.

Asha also sang the under-rated ‘Jaan-e-jaana Yun Na Dekho’, filmed on Minoo and Dara Singh in Faulad. And while Asha sang more songs for her, even Lata and Shamshad suited her personality. Thank you for the memories, Minoo Mumtaz.