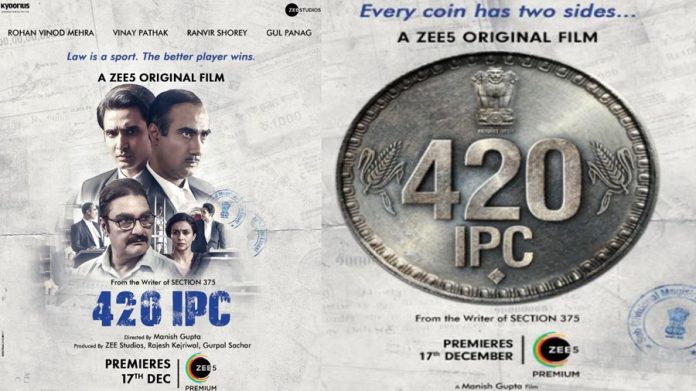 It is difficult to convert white collar crime into interesting cinema, unless it is a well-known scam that affects a large number of people, which is why stories involving Harshad Mehta and Abdul Karim Telgi appeal to audiences.

Manish Gupta’s 420 IPC (Zee5) works to some extent because of the casting, the short runtime and turning the matter of a man’s financial misdeeds into a brisk courtroom drama.  (In reality, cases drag on for years in India, and the tortuous course of justice is seldom clear).

Bansi Keswani (Vinay Pathak), a chartered accountant, who is having trouble paying the EMIs on his flat, is harassed with an invasive search by the CBI for a fraud committed by a client. He is exonerated then, but soon arrested for stealing cheques from another client, a builder, Neeraj Sinha (an unrecognisable Arif Zakaria).

The prosecutor Savak Jamshedji (Ranvir Shorey) can prove motive and opportunity, but he is pitted against the young and ambitious Birbal Choudhary (Rohan Vinod Mehra), who is tech-savvy and not averse to using underhand means to get his defendant out of jail. The judge, who is on buddy terms with the older lawyer, allows Birbal a lot of leeway, pulling him up only when he presents a fake video to get a confession out of a witness.

Gupta, who is also the writer of the film, deftly inserts twists into the plot, so the viewer is never sure if the helpless looking Keswani, in his crumpled bushshirt, is guilty or not, and to what extent his harried wife (Gul Panag) is involved.

There is little scope for humour in the film, and the director thankfully avoids any songs in the background. There are several script conveniences like Birbal flirting with a young female cop to get access to information, and a hacker getting important documents that the CBI with all its resources is unable to find.

What is not surprising is the extent of corruption in the government and law enforcement agencies, which could, easily crush a powerless citizen. Not everyone gets a lawyer who would spend his own money to gather evidence.

Vinay Pathak and Gul Panang are perfectly cast and so at ease, that in a scene in court they can communicate with just their eyes. Ranvir Shorey, with a condescending look pasted on his face, is excellent as the seen-it-all prosecutor. Rohan Vinod Mehra has a bit of Bollywood swagger that does not go well with the grim realism of the film. Probably the director’s fault, but there are cringe-making scenes of his female intern helping him on with his coat.

There are no clear villains or victims in the film, which perhaps makes an important moral point—given a chance and no fear of being caught, how many would be incorruptible?  420 IPC is not a nail-biting film, but engaging enough to pass an idle evening in front of the TV.