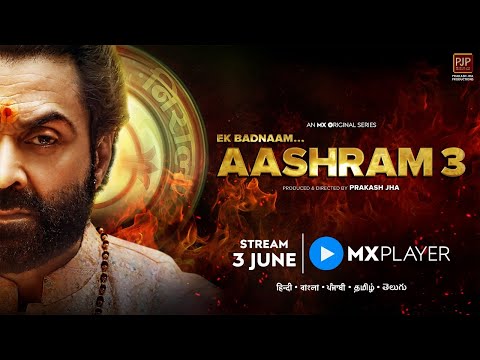 When Prakash Jha’s Aashram came out (in 2020), it resuscitated Bobby Deol’s stagnant career, and gave the fledgling OTT channel MX Player its flagship show. The series about a fraud godman was obviously inspired by the shenanigans of real-life so-called gurus in the news for their debauchery, greed, corruption and power grab.

It indirectly lampooned the gullibility of Indians, who fell into fake spiritual traps, and were so easy to control and con.

Bobby Deol played Kashipurwale Baba Nirala, who, along with his cohort Bhopa Swami (Chandan Roy Sanyal), amassed immense wealth and political power, using the aashram as their cover. Under the guise of spiritual healers, Nirala and Bhopa are just jumped up thugs, power brokers and sexual predators.

Season 2, followed soon after, with more of the same (with unavoidable crassness in parts), which ended interestingly enough with the escape of a disciple Pammi Pehelwan (Aaditi Pohankar), who hoped to make a career in sports, but ended up being exploited by Nirala.

Season 3, renamed Ek Badnaam Aashram, just inches forward—there is little character development.  Nirala and Bhopa still play politicians Hukum Singh (Sachin Shroff) and Sunder Lal (Anil Rastogi) against each other, making money out of both. Nirala supports Hukum Singh, places him on the chief minister’s chair, and then proceeds to pull the strings like a puppeteer.

Meanwhile, Pammi is on the run with an honest journalist Akki (Rajeev Siddhartha), with the entire police force of the state in pursuit, because Nirala and Bhopa have either lined every pocket or roped them in as devotees. Those who have not been bought are too afraid to speak up.

The only other courageous opponents of Nirala are a cop Ujagar (Darshan Kumar) and doctor (Anupriya Goenka). A new character, Sonia (Esha Gupta) is introduced as a sexy image consultant, for Baba to become Bhagwan. From the past, when he was small-time carjacker Monty, his wife Banno (Tulika Banerjee) turns up with a file of his secrets. Nirala is, however, moping over the runaway Pammi, like a teenager in love. Unlike other women he assaults, she does not stick around to be his minion, she wants revenge for her rape and the deaths of her father and brother.

The series is visually richer, but moves in the same narrow circle, so 10 episodes drag. There was not much complexity to the character of Nirala to begin with—he was all black, with no redeeming traits. He does not even tip into self-delusion when he declares himself to be God. Bhopa with his ambition and cunning is the power behind the Baba throne.

A preview of Season 4, scheduled for next year, actually looked intriguing, and will hopefully, bring an end to the much-too-stretched saga of the Baba-Bhopa’s criminal empire.