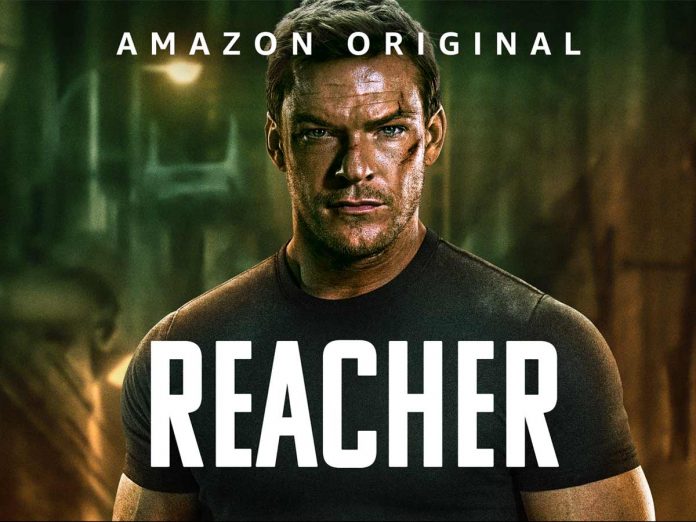 Jack Reacher is a fascinating character, created by Lee Child, who wrote about 26 novels starring the six-foot five giant of a man, ex army intelligence, who lives like a “hobo.”

He owns nothing but the clothes on his back and a toothbrush in his pocket, along with a wallet. When his clothes get too filthy he buys a new set and throws away the old. He is constantly on the move, and gets involved in all kinds of adventures he does nothing to seek, but does not avoid either. He has nowhere to go, and nothing to do, except, maybe, kill bad guys when they cross his path. He is a unique hero, which Tom Cruise could not quite nail in the two films in which he played the part­— he is just not bigh enough or ferocious enough.

In the eight-part Amazon Prime series, Reacher, based on the book Killing Floor, Alan Ritchson is perfectly cast as the laconic man mountain, whose brain is as sharp as his fists are lethal.  He has just gotten off a bus at the fictional town of Margrave, when he is arrested as a murder suspect. A battered body has been found in a field, and he happened to be around. Nobody believes his excuse of visiting the podunk town to learn more about a blues musician.

Reacher has a watertight alibi, but the case turns out to be personal, since the body happens to be that of his brother Joe. The town’s chief detective Oscar Finley (Malcolm Goodwin), a black man dressed in tailored three-piece suits, is as much an outsider in Margrave as Reacher, and not liked by his white subordinates. Finlay is exasperated by Reacher’s interference, but also realizes he needs the man’s help if he is to solve the case as more corpses keep piling up. The other ally Reacher acquires (and there is always a female around as a temporary love interest) is Roscoe Conklin (Willa Fitzgerald), who belongs to the clan that established the town and is suspicious of the Kliner family that has bought up Margrave’s loyalty by setting up businesses and employing locals. The town’s mayor is also a dubious sort, and between the two they have dozens of henchmen on call. Needless to say, they are no match for Reacher, who believes in vigilante justice and feels no guilt killing “bad people”—and the people he thrashes are the kind who dismember innocents, so they cannot expect mercy. He is equally supportive of the victims of those bad men, and goes out of his way to help an accountant who was trapped by Kline into running his counterfeiting operation.

Nick Santora’s adaptation of the book, helmed by different directors, is respectful and thorough—in any case, the action set pieces are more fun to watch than to read. The violence is gruesome, but Ritchson moves with amazing speed and grace for a man of his bulk.

The brutality is tempered with wit and warmth, the man called “Frankenstein’s monster” among other unflattering names, melts at the sight of a dog abused by his owner—and the mean guy gets what’s coming to him!

A series this entertaining has to get a Season 2, and it is reportedly on the way. When they have found the right Reacher, why let him go?

Reacher – Based on the novel Killing Floor by Lee Child
Cast: Alan Ritchson, Malcolm Goodwin, Wella Fitzgerald and others