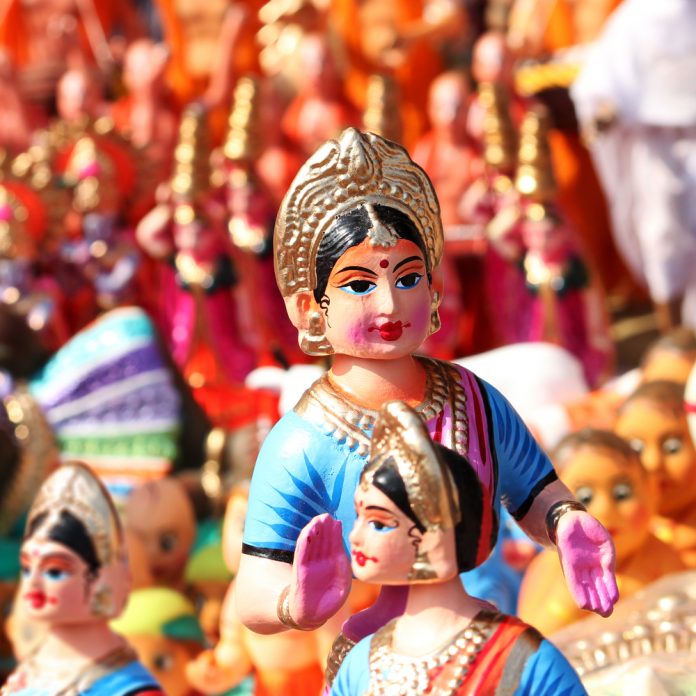 The celebrations of the nine-day Navratri festival are a feast for the five senses and a spiritual ecstasy par definition, writes Nagesh Alai

I can feel it coming in the air tonight, Oh Maa!

It is that time of the year when there is an inescapable air of excitement, emotions and empathy, difficult of capture in words, when one of the most important annual Hindu festivals is celebrated. The variegated celebrations, of the nine-day Navratri festival culminating in Dussehra or Vijaya Dashmi on the tenth day, across India, be it Tamil Nadu, Karnataka, Andhra Pradesh, Telangana, West Bengal, Gujarat, Maharashtra, Orissa or any other state, is a feast for the five senses and a spiritual ecstasy par definition.

A family get-together yesterday at my sister’s home and espying her charming little Bommai Golu or Kolu (called Bommala Koluvu in Telugu and Bombe Haba in Kannada) revived vivid memories of the immersive experiences of celebrating Navratri in my growing up days.

We were living in a society of five buildings, surrounding a huge patch of common open ground, comprised of 104 families – predominantly Maharashtrians, followed by a significant number of Gujaratis and merely three South Indian families – one from Andhra and the other two from Tamil Nadu, one of whom is the writer’s family. Thanks to my Amma’s faith and fervour for our culture, all the festivals were celebrated with the right mix of piety and comity, drawing in almost all the families in the society to partake of the celebrations and the umbilical feasts that goes with them. The visit to our home was a discovery and tour of the Tamilian culture, cuisine and comportment, not to mention the kancheevaram sarees, malligai pookkal (mogra flowers), kolam (rangoli), kuthuvilakku (oil lamp) and Carnatic music, for the 100 odd families in our society. Many in our commune believed in an open-door policy and several were in and out of each other’s homes almost every day where the lines between families and neighbours were sliver thin and culture fusion inseparable.

The unforgettable tactile joy of retrieving the various trunks, containing the ‘bommais’ (statuettes, figurines, dolls and toys) from the farthest dust filled end of the narrow loft and bringing them down, unwrapping and cleaning the dolls with devotion and admiration was a part of the memorable experiences. Rounds of the several popular shops like Giri, Lalwani Stores and several others in Matunga East in Mumbai to get these bommais, made of clay, mud or plaster of paris, were immeasurable joy and thrill. Building/setting up the tiers or padi(s) ( it was always in odd numbers – three, five, seven, nine or 11; five being the most preferred because of space constraints, while nine was the optimum choice, given the significance of nine), aligning all the steps and fixing them with nuts and bolts made one feel that an architectural marvel, worthy of the divine architect, Vishwakarma, has been constructed. Decking and embellishing the steps with contrasting colour papers or clothes puffed us with joy and pride with no prejudice. Building model gardens or water dams or street scenes or sports fields with player or whatever one’s imagination can conjure up were great avenues for creative expression and immensely added to the beauty and charm of the golus. We were five siblings and all of us worked for days and nights as a team to put it all together along with the help of many friends in the colony. After all, the fun is in living the passion. 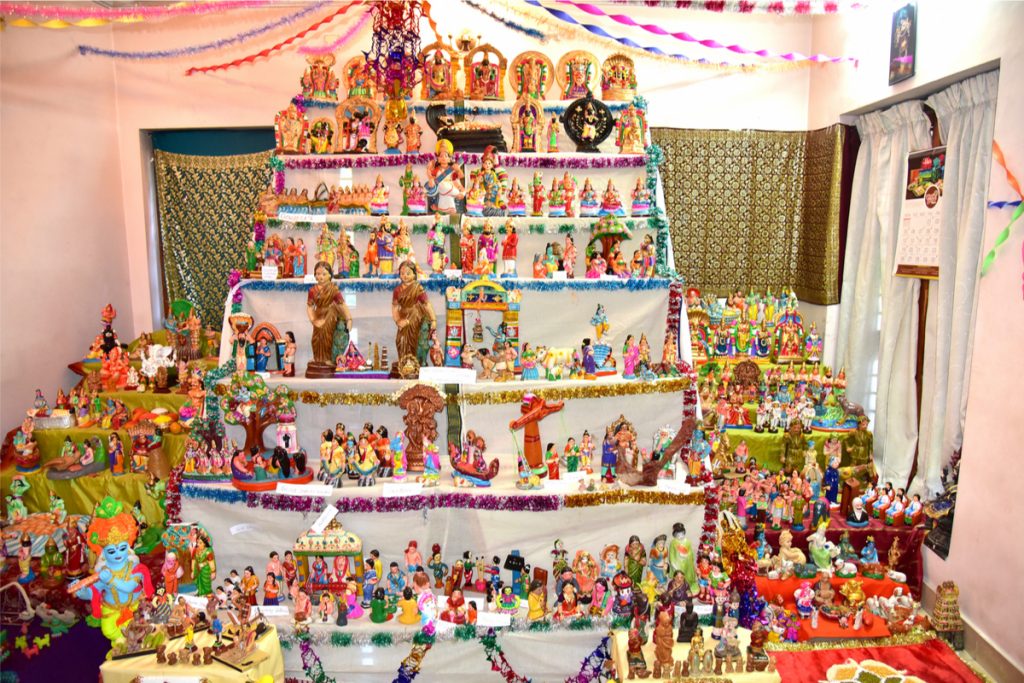 Golu began with the pooja of the kalasham (a pot, made of steel or copper or silver) filled with water or rice and pulses and topped with mango leaves and coconut. It is always kept in the centre of the topmost tier or padi. The kalasham is a traditional part of the Hindu rituals and in the case of Navratri, it represents the Mother Goddess.  Typically, the first padi at the lowest level is the longest and as you progressively go up, it becomes shorter. The order for the arrangement of the dolls in the various steps has a philosophical approach and is reflective of one’s relative position in the evolutionary totem pole of life. The top two or three tiers have the idols of the various Gods and as we progress down the steps (say of nine), idols of avatars, sages and saints and the realised souls like Adi Shankaracharya or Ved Vyas are kept followed by contemporary noble persons like martyrs, freedom fighters, social activists etc in the fourth or third padi.

Thereafter, common human beings like householders, farmers, potter, etc. are placed followed by animals, birds and insects and crawlers. As a person progresses in his or her spiritual pursuit and eventually realises the Self, he or she will find a place closer to God. Kolam or rangoli was an integral part of the golu and was drawn on the floor immediately below the lowest padi. It could be a simple white rice flour and geru (red/ochre in colour) or intricately designed with multiple colours. In the centre of the kolam, the kuttuvilakku was kept and the family ensured that it stayed lit for most part of the day. Neivediyam or prasad were cooked every day and offered to the presiding deity.

On display was also the ‘marapattchi’ bommais – of a man and a woman – made of wood. These marapattchi bommai used to be decked up with fineries and jewels and was a part of the marriage trousseau of a typical Tamilian bride. It symbolises the life journey and our responsible roles as grihastas and custodians of culture.

Within the above contours, we used to have different themes every year for the golu. It could be Dashavataram or Gita or a Gurukul or a cricket match or any contemporary event that people can identify with. The creative expressions were myriad and it used to be tough to mount and execute these. But the hard work was all worthwhile when the visitors used to enjoy seeing the exhibits and shower fulsome praise.

During the nine days of Navratri, every evening, our home used to teem with ladies and children and on some days accompanied by men folk, to have a darshan of the golu and ingest sumptuous spread of sundals (various sprouts and beans like chickpeas, cowpeas, broad beans, green gram, etc.) and other savouries, of course followed by the ubiquitous filter coffee. The never-ending babble of the visitors on various subjects was engaging and it quietened only when some of the visitors would turn nightingales with an impromptu kutchery of Carnatic songs. Quite often, my three sisters used to be at their vocal best during these mini concerts at home.

The Navratri concluded with the Saraswati Puja on the ninth day when we worshipped the books and sought blessings for knowledge and wisdom. I remember keeping the books of the toughest subjects and praying for divine solutions. Putting away the dolls and dismantling the display on the tenth day was a ritual in itself and one felt bereft and empty for a number of days after Navratri. 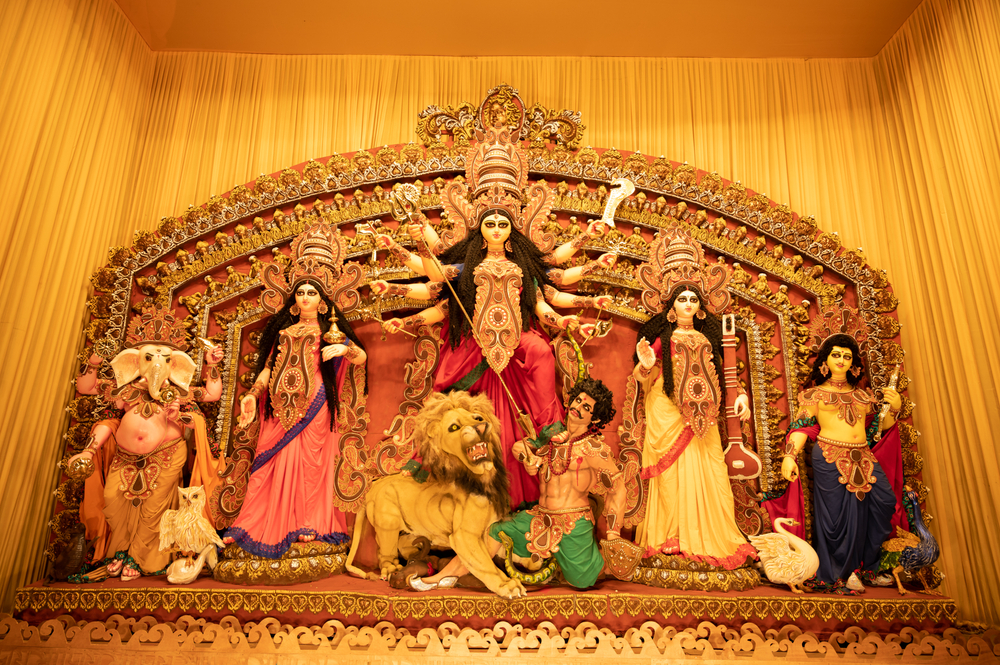 Essentially, the Navratri festival is a celebration of the nine forms of Mother Goddess Durga or Shakti. In South India, three days each are dedicated to the worship of Durga, Laxmi and Saraswati for knowledge, prosperity, wellbeing and good auspices. The nine steps could also represent the navagrahas or the nine planets, representing their influence on us. The festival represents the nine days and nights that Goddess Durga battled with the powerful asura, Mahishasura, who had a divine boon to keep changing his form and could not be defeated by any man. Hence, Goddess Durga, was endowed with all supreme powers by the gods and devas and sent to vanquish Mahishasura. On the tenth day, Durga slayed Mahishasura when he took the form of a buffalo. Dussehra or Vijay Dashmi is celebrated in honour of Goddess Durga’s victory. Symbolically, Navratri is the celebration of the woman power or Shakti, which causes life on earth. One has only to visit Kolkata or Karnataka and take part in the public celebrations to feel the devotion and obeisance for Durga.

Interestingly, Lord Rama is also supposed to have killed the 10-headed Ravana on the same day, leading to the celebration of Dussehra or Vijay Dashmi. Perhaps it is the cosmic energy or the Supreme working in unison to rid the world of evil forces. That would explain the burning of Ravana’s effigy in many parts of India. 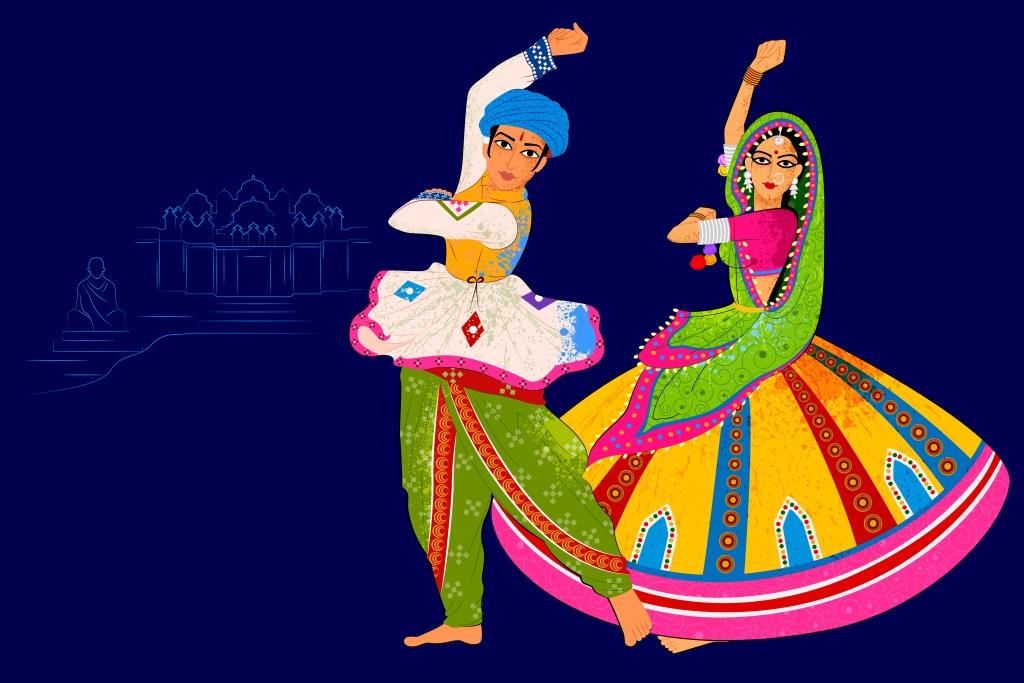 In several parts of North India, Kumari or Kanya Pooja is performed during Navaratri. Young girls, between the age of two to ten, representing the nine forms of Durga, are worshipped every day. In Gujarat and Rajasthan, Garbha (or the womb), symbolic of the Shakti at the core of our existence, is worshipped by fasting. The Garbha (or Garba) dance, the circular dance performed by women in colourful chaniya choli, around the deity, symbolises the circle of life and death, while the dandiya raas played by women and men is symbolic of the nine days and nights of the fierce battle between Durga and Mahishasura. You only have to take part in a garba or dandiya raas dance to feel the cosmic energy of Shakti.

Golu or Garba, it is Durga who seeks us out for blessing us in the circle of life. Women empowerment was in vogue in India eons ago, much before the contemporary awakening and woke!