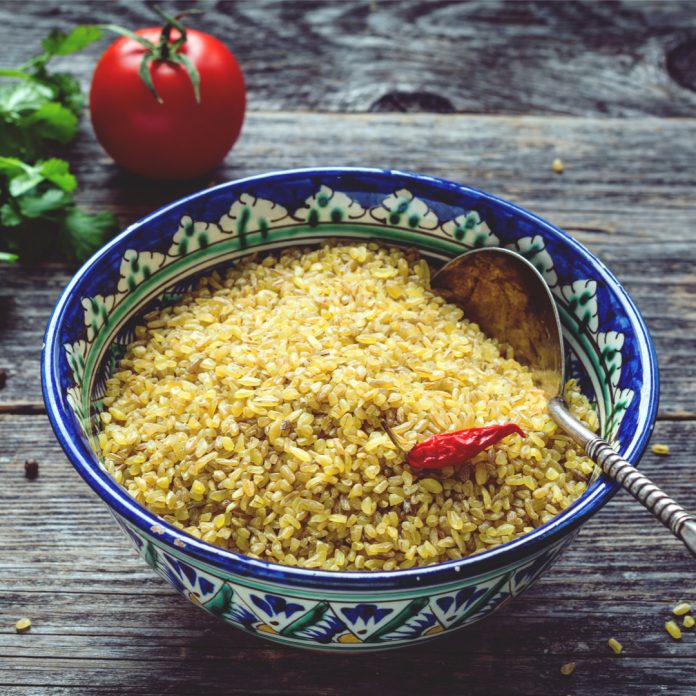 Bulgur wheat also known as Burghul Wheat or Riffoth. In India, Bulgur Wheat is referred to as “Fada”. It is a type of cereal made from whole grain wheat, mainly Durum Wheat.

– Bulgar being parboiled, can be prepared relatively quickly and can be eaten cooked, raw or rehydrated.

– Bulgur is available in a wide range of grinds just like coffee. The types of grinds are typically fine, medium, coarse and extra coarse.

– It has a light, nutty and rustic flavour, mild in taste, chewy in texture and a popcorn like aroma when it cooks.

– Store bought Bulgur Wheat should be stored in an airtight container to keep it moisture free and protected from light and heat. If stored well, it can last for up to twenty-four months, and even longer if frozen.

– Parboiling Bulgur increases its shelf life, making it last longer than a lot of grains.

– It is a versatile staple used in Middle Eastern, West Asian and Mediterranean cuisine.

– Nutritional value of Bulgur Wheat — being a whole grain it is packed with nutrients as compared to a refined grain product. It is also loaded with vitamins and minerals like copper, manganese, vitamin B6, zinc and folate, a rich source of protein, abundant in fibre and relatively low in calories compared to other whole grains like rice and quinoa.

How to cook Bulgur Wheat —

Bulgur wheat is relatively easy to prepare. Its parboiled or partially pre-cooked condition makes it quick to prepare. Each type of Bulgur Wheat grind takes about ten to twenty minutes to cook depending on which cooking method and grind you opt for. Most often store bought Bulgur Wheat comes with methods of preparation and cooking instructions. However, if you don’t have any cooking instructions or if you have purchased Bulgur Wheat from your local “attawala”, here are a few ways to prepare it.

To prepare cooked Bulgur Wheat at home you can use a stove top, microwave or rehydration —

The cooking process is similar to that of rice, quinoa or couscous. Combine boiling water and Bulgur in the ratio of 1:2. For every one part of Bulgur Wheat, you will need two parts of water or broth depending on your recipe and taste buds. It slowly softens and cooks as the water boils, reduce the heat to medium- low and allow the mixture to simmer keeping it covered for ten minutes or until the water or broth has evaporated and the Bulgur Wheat is soft and tender. It’s ready!

Microwaving Bulgur Wheat is a dummy cooking method but definitely the easiest without any negative effects or results. However the texture might vary in comparison to traditionally cooked stovetop method. Combine Bulgur Wheat with water or broth using the 1:2 ratio in a microwave-safe bowl and microwave for approximately three minutes on high heat. Remove the bowl from the microwave and let sit on your kitchen counter for five minutes. Check the consistancy of the mixture, if it is soft, its ready, if not, adjust the cooking time as needed and monitor the consistancy. Once the liquid has been absorbed by the grain and has a soft tender texture, your microwave Bulgur Wheat is ready to be eaten.

Rehydrating works very well for fine grain Bulgur Wheat. Medium to coarse grain Bulgur Wheat takes much longer to rehydrate. Once again, combine Bulgur Wheat and warm water or warm broth in the 1:2 ratio and let the mixture rest on your kitchen counter for approximately fifty minutes or until the liquid has been absorbed. Fluff up the Bulgur Wheat using a fork and Voila!

Bulgur wheat is a staple in many West Asian and Mediterranean dishes.

– It is often used in pilafs, salads, soups and stews, with vegetables and with meat, infused with flavour using herbs and spices.

– It is often used in breakfast style porridges as an oatmeal substitute.

– Owing to its chewy texture,it is often used in place of ground meats to create vegan or plant based versions of dishes.

– Bulgur Wheat can be used as a substitute of rice, quinoa, couscous in almost all recipes.

Bulgur Wheat is loaded with vitamins, minerals, protein and fibre which is extremely beneficial to your health. It aids in disease prevention, regulation and even improved overall health. Listed below are benefits of including Bulgur Wheat in your diet.

In general, eating fibrous foods like whole grains, fruits, and vegetables promote heart health. Bulgur Wheat being a whole grain falls into this category. Research has linked the consumption of whole grains to a lower risk of heart disease, stroke, heart failure and other cardiac related issues.

It supports digestion and gut health

Regularly consuming whole grains is extremely beneficial for gut health. Eating Bulgur Wheat helps promote the growth of healthy bacteria in the gut. This helps in efficient digestive functioning and intestinal health and also aid in the prevention and treatment of problems like constipation.

It aids in weight loss

A person’s weight is affected and influenced by a host of factors of which dietary fibres are high on the list. The effect of fibre on the gut by eating fibrous foods like Bulgur Wheat leads to an increased sense of fullness and thus reduced calorie intake, supports a balanced diet and maintenance of weight, plus aids in weight loss and beneficial for overall optimal health.

Does consuming bulgur wheat have any downsides?

Eating Bulgur Wheat is safe for most people, however it might not be everyone’s cup of tea. Be it due to its flavour, texture, personal preferences or preexisting  medical conditions like gluten or wheat allergies.

Bulgur Wheat being a wheat product cannot be consumed by people with a wheat allergy or gluten-related disorder.

Some people with chronic intestinal disorders, such as irritable bowel syndrome (IBS), inflammatory bowel disease (IBD)  may not tolerate bulgur due to its insoluble fibre content.

It is recommended to do a tolerance test of a small amount of Bulgur Wheat before including it in your diet. Wait for your body to give you the green signal.

Bulgur wheat is a healthy and hearty whole grain — fibre and micronutrient rich.

A source of protein, low in fat and calories.

It is not gluten free.

Many of Bulgur Wheat’s health benefits are attributed to its fibre and plant compounds.

Drinking a lot of water is recommended when Bulgur Wheat or any high fibrous foods are part of your diet.