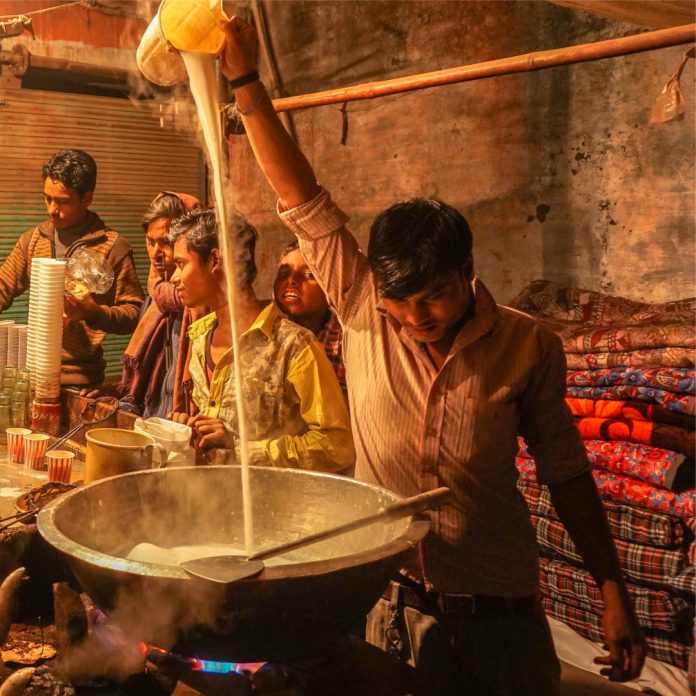 To me Chai is an inherent part of Indian culture, especially Konkan upwards.  What is the first thing you hear when you visit a family member or a friend or even a neighbour? Chai peeyoge? Chaha ghenar? Chah peesho? At a neighbourhood dhaba, the ever familiar topori yell (while he spits out a fine pichakari of betel leaf juice) “ek cutting chai aur do gilaas, bheedu!” A standard tableau at a college canteen is that cup of chai with four saucers with some self appointed leader stating to the only female at the table, ‘tu cup aamhi bashi’ (you take the cup, we will take the saucers) and goes on to divide a meticulous fourth for each.

Thus, while attending the Indian Cultural Film Festival here in Houston, during the reception I desperately searched for this hot beverage. My eyes must have communicated a sense of desperation to a portly suited booted organiser who proceeded to approach me with a nonchalant somewhat supercilious attitude.

Organizer: Everything alright? Hope you are enjoying your evening.

Me:  Yes, but the evening would be perfect if the guests could have had chai.

Organiser (aghast): Whaat?? Do you realize this is a (with air quotes) ‘cultural’ event?

So, if at this point you are nodding your head and thinking, ‘aha, phirangi dude’. Cease and desist.  He was every inch a product of some Convent school from South Mumbai or Vasant Vihar in Delhi.  The type who ate puri for breakfast and told his classmates he had fried wheat bread.  You shrewd readers! you have conjured the species quite precisely.

Anyway, not to be outdone and deliberately ignoring the scathing glare, I cheekily ventured: “what part of chai sounds devoid of Indian culture to you, my dear man?” Just as my fellow rowdies started chiming, ‘chai, chai, chai…’ he turned on his tail and walked away.  I mean it literally the guy was wearing foxtails. For the rest of the reception, I noticed him shooting poison darts, his sallow face writing in anger only to be replaced by a placid smile for a VIP guest sporting a pallor akin to Caesar widely known as the friendly ghost.

Enough with the rambling and coming straight to the point, let me unburden my pet peeve that emphasises rudimentary behavior of some of my fellow desis on this continent who wear their complex like a badge of honor.  It almost warrants that I make a TED talk video or in case such talks are obsolete, a podcast or whatever is trendy these days to get my point across. The point being, look around you, you yo-yos – these non-desi guests attend your galas so as to escape into your mystical culture and ride that magic carpet into a land of colour, spices and flavours that scream exotic. But no, you insist on callously cordoning off their whimsical desires to partake of a rich culture. Instead you shirk and squirm shedding the last vestige of dignity which possibly could be salvaged by showcasing your culture grounded in thousands of years of tradition, and quite possibly garner respect that you so obviously crave.

Venting aside, please feel free to take an initiative and portray my above thoughts on social media, while I quietly enjoy the scene ahead as I sit myself in the auditorium for the screening of an award winning documentary about the simple pleasures of life in rural India. The scene ahead caricatures our lone artist/organiser, brown sahib tactically trying to sit despite the tails flapping around his knees.  He finally gives up and collects the bottom half of his tuxedo, he yanks both sides and piles them atop his lap.  The lights dim, the screen comes alive but not before our snickers ride the airwaves and come to rest upon his honour the smithering idiot’s ears.