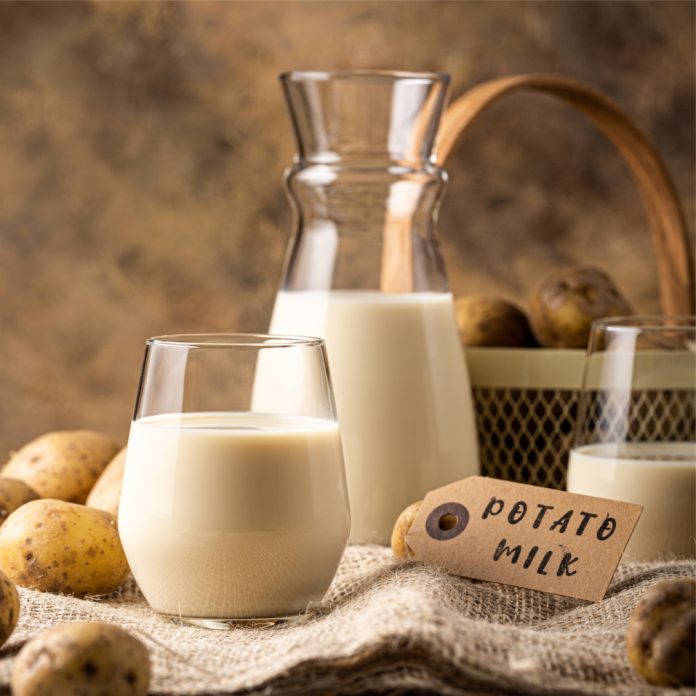 How potato milk measures up against other plant-based milk alternatives

It seems like almost every plant-based food is being turned into “milk” these days, the latest being potato milk.

No matter the type of plant-based milk, they only contain a fraction of the ingredient they’re derived from. For example, only 10% of the volume of a carton of rice or oat milk comes from these grains. Soy drinks contain between 5%-8% of the actual soya bean, and almond milks contain as little as 2% of the actual nut. Since coconut uses the cream or milk from the fruit, it contains between 5%-13%, depending on how creamy the product is. And based on the current potato milk products out there, a one-litre carton only contains around 60g of an actual potato – a small potato.

The problem with this is that these milks now contain far fewer vitamins and nutrients than the raw ingredient would. This may make them less nutritious than they would be if you ate the ingredient whole.

Take protein, for example. Ingredients like almonds are naturally great sources of protein containing over 20g of protein per 100g of almonds.

Soya milk is better as it contains more of the soya beans compared with almond milk. In fact, soya milk gives around 3-3.5g of protein per 100ml. This is about as much protein as you get in the same amount of cow’s milk. And like cow’s milk, soya milk contains essential amino acids which our body isn’t able to naturally produce. Amino acids are important as they ensure our body works properly – such as by helping our muscles keep moving.

Potatoes are already low in protein. This means that after processing, potato milk contains about as much protein as coconut and rice milk – less than 0.5g of protein per 100ml. But some potato milk brands do supplement with pea protein, which makes a 100ml serving have around 1.3g of protein.

So if you’re choosing your plant-based milk for protein content, you might be best sticking with soya or almond milk over potato milk.

As with cow’s milk, plant-based milks can also contain added sugars. We are encouraged to limit our added sugar intake to no more than five to six teaspoons a day. This is because eating too much sugar is linked to an increased risk of obesity as well as tooth decay. But given many products sell both sweetened and unsweetened versions, it’s easier for someone to buy a product that contains no sugar.

Since potatoes are naturally low in fat, potato milk would have a texture more akin to water. This is why extra fat is added to it. A similar thing is done with rice and oat milk, where oil (such as sunflower oil) is added. This brings the fat content up so that it’s closer to semi-skimmed milk (about 1.5g per 100ml). For potato milk, rapeseed oil is added. Almond and soya both tend to contain fat already, so no additional oil is added.

This means that compared with other plant-based milks, potato milk is higher in monounsaturated fats, which are thought to be better for your heart. They’re also lower in saturated fats than cow’s milk, which is thought to be less healthy for our hearts.

A “barista version” of milk alternatives needs to contain a combination of both protein and fat in order for the milk to foam, so have slightly more fat added to them.

When it comes to vitamins and minerals, many plant-based milks have these added to them, as they simply don’t have as many as cow’s milk naturally does.

Vitamins like riboflavin, B12 and D alongside calcium are added to potato milks. The same is also true for other plant-based milks – although organic versions may not have added vitamins often due to organic food rules and trying to keep the label clean of additives.

As many of us struggle to get enough vitamin D – which is essential for healthy bones and immune system – and many vegans and vegetarians can have low B12 levels (which is needed to keep our blood cells and nerves healthy) going for milk alternatives with these added vitamins and minerals can be a good idea.

Potato milk is yet another option for those wanting an alternative to cow’s milk or other plant-based milks, or those looking for a more environmentally friendly milk product. Nutritionally, it may not contain the protein of soya milk, but many products are fortified, so they still contain important vitamins and minerals.

But since it contains several refined ingredients, such as oils and protein isolates (proteins extracted from foods), it may technically count as an ultra-processed food. There are some concerns about ultra-processed foods, which have been linked to chronic disease – so it is yet to be seen whether potato milk has similar risks.