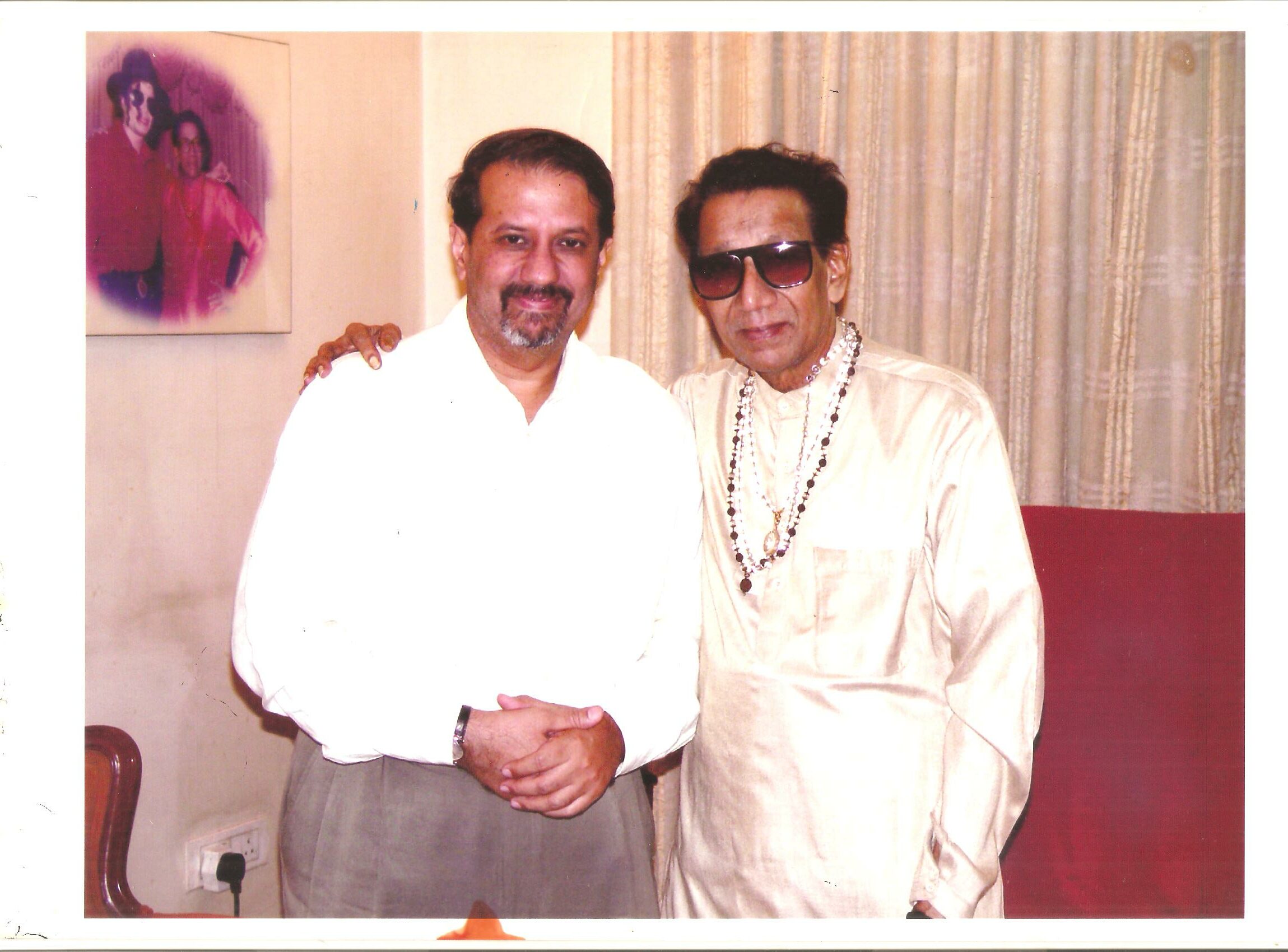 The sad demise of Balasaheb Thackeray seven years ago left a gap not just in politics but in the world of art, too. Vickram Sethi looks back

November 17 marks the seventh death anniversary of Shiv Sena founder Balasaheb Thackeray. Gazing back over the years, I recall an artistic encounter with him. I was the curator of Tina Ambani’s Harmony show, an annual art event where I would spot new talent. By far it was India’s biggest art exhibition. 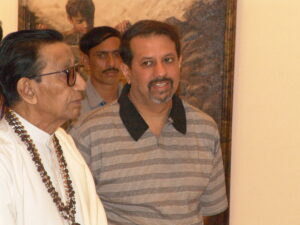 d invite Balasaheb every year to inaugurate the event. In the year 2003, Balasaheb said he would visit the show but not inaugurate it, because it would create too many security issues and put everybody to a lot of inconveniences. It was agreed that he would visit the show between 10.30 and 11 on a Sunday morning. Balasaheb arrived at Nehru Centre at 10.30 am and I escorted him around the exhibition. Patiently Balasaheb went around looking at all the artworks with a lot of interest. In my conversation, I must have said “Bombay” three times and like a schoolmaster, he corrected me each time, “Mumbai”. I must confess I was very embarrassed. Between our conversations, I was showing him some works of art and I mentioned: “Sir, look at this artist’s draughtsmanship”. Suddenly, Balasaheb said “Draughtsmanship?” and asked me “What are you doing this evening?” I said, “Nothing sir.” “Come to my house at 7 o’clock.”

An invitation to Balasaheb’s home is an invitation to Fort Knox. To my misfortune, I reached 15 minutes late and I apologized saying that I got stuck in traffic, to which he replied: “I would have sent you my car.”We laughed, and so the evening began.

Balasaheb wanted to show me his cartoons. When he did, it was to tell me, “This is what draughtsmanship is all about,” explaining that he had to fit in everything within [the size of the cartoon in the newspaper]. What Balasaheb was showing me were photocopies and not the originals. I asked him where the originals were; he said his wife burnt them because of white ants. “Wife is wife even if it is the tiger’s,” I told myself.

Balasaheb had a story to tell with every cartoon, and story after story was hilarious. He remembered everything and in great detail. We laughed a lot. Just then there was a lot of commotion – young Tejas was in trouble with his mother. Balasaheb quickly sent Mhatre to bring the boy up, pretended to scold the lad and made him repeat “Mi khota bolnar nahi…Mi khota bolnar nahi!!!” (I will not lie) once, twice and repeated after him right up to 10times. Here was the grandfather. I think Balasaheb was also buying time by which tempers would have cooled and Tejas could be sent back.

We then resumed our conversation. There was one particular cartoon where the Congress had suffered a defeat and Murli Deora was shown lying on his stomach and somebody peering at his backside saying,“It’s a puncture.” I told Balasaheb that the spelling of ‘puncture’ was wrong.“Rubbish,” he said, pulled out a dictionary and sure enough, the spelling was right and I was wrong. Somewhere in the conversation, I told him this was Marathi-English. To which Balasaheb replied that it is in their head – he used a common sentence, “Tumcha block kuthe aahe… dokyaat” (The block is in your head). I suggested that he should publish a book of these cartoons along with the anecdotes because that would become a very relevant part of history. 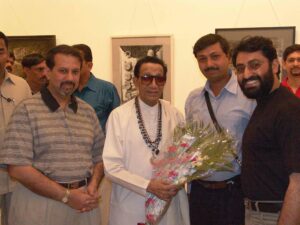 When you are in awe of someone you tend to laugh even more at their jokes. But Balasaheb was genuinely funny and story after story he shared in the most hilarious fashion. I also told him my Pune jokes – “Ek mulga tychya mitrakade jato aani vicharato  Anna, Bandu kuthe aahe?’ Anna – ‘To aatmadhye garam garam pohe khaat basalay. Tula pan bhuk lagal iasel’ Mulga – ‘Ho na..’ Anna – “Mag tu pan ghari jaun khaun ye” (one boy went to his friend’s house and asked his friend’s father “where is Bandu?” the father replied “He is having some piping hot poha for breakfast… you must be hungry as well? The boy said “yes” the father replied, “then you go home eat and come!”)

Just then Raj Thackeray came up and he said, “Bagh he kay mhantayt…” (look what he is saying) to which Raj replied they were planning to publish a book – and eventually the book did get published but I think it was in Marathi.

Balasaheb told Raj about the Harmony show. Raj said he come would next morning around 12ish, sure enough, he and his wife both came to see the show. Through the evening we were served hot poha. Before we were ushered into the room, Balasaheb’s assistant Mhatre had said that we would have to leave the place at 8.45 pm because Saheb ate his dinner at 9. A little later Uddhav and his wife both came up, and Balasaheb told them about the Harmony show and they promised to come the next day which they did.

All through the evening, there was so much laughter, I don’t think Balasaheb would have laughed so much as he did while narrating his own stories. Just then the artist who was feeling left out throughout the evening popped a question: “Sir what do you think of Ram Mandir?” Balasaheb dismissed his question, saying,“Main Bhagwan ko Bachau, ya Bhagwan Mujhe Bachaye?”

Balasaheb was imitating Sushma Swaraj’s Aadab while she had gone to receive President Pervez Musharraf and of course L. K. Advani’s hand-wringing, “Helpless” he said.

Balasaheb had a sharp wit and a great sense of humor. It was already a quarter to nine and Mhatre was signaling that it was time for us to leave. Balasaheb nodded and said, “Yes, they will leave,” but we stayed on for another 10-15 minutes and I think we left at 9. As we got up, Balasaheb took Mhatre’s card and on the back, he wrote down his own number and said: “Vickram, if ever you need anything call me.”

While we were at the door I don’t know what prompted me to say, but I told him, sir, you started the Shiv Sena and I am a very proud Shivajian. Instantly Balasaheb said:“You come to meet me for half an hour and you want to start a rival political party?” To which I replied:“No sir, I studied in Sri Shivaji Preparatory Military School and we all called ourselves Shivajians.”

We laughed and I left.

Mhatre would once in a while call and ask about a particular artist. On an occasion, he had also sent me some leaflets to check on the color and the layout. A year later, the artist had a show and enquired whether I could speak to Balasaheb and request him to visit the exhibition at Jehangir Art Gallery. I did call Balasaheb, we had a brief conversation and I asked him whether he would come to see the exhibition at Jehangir Art Gallery which Balasaheb confirmed with Mhatre and said yes he would come at 11. And while signing off, he said don’t be late. Obviously he had not forgotten that I had reached 15 minutes late at his house.

Balasaheb arrived at 10:30. I had just about parked my car and rushed towards Jehangir. His first question was “You have just come, isn’t it?” I told him “Sir, you have come 15 minutes early,” we laughed and he went around the exhibition. He spent half an hour looking at all the works, then we sat down and chatted for another five minutes. I said, “Sir, let’s go and have coffee.”Just then Mhatre stepped in and said that they had somewhere else to go and they would get late. While leaving he said, “Vickram shyam ko aana apan guppa marenge.”

That was the last I saw of him. There was something about Balasaheb that established a connection with his audience immediately. His sense of humor, his ability to get a point across. For a man who was only 5 foot 4 inches, I think he was one of the tallest leaders of Maharashtra.