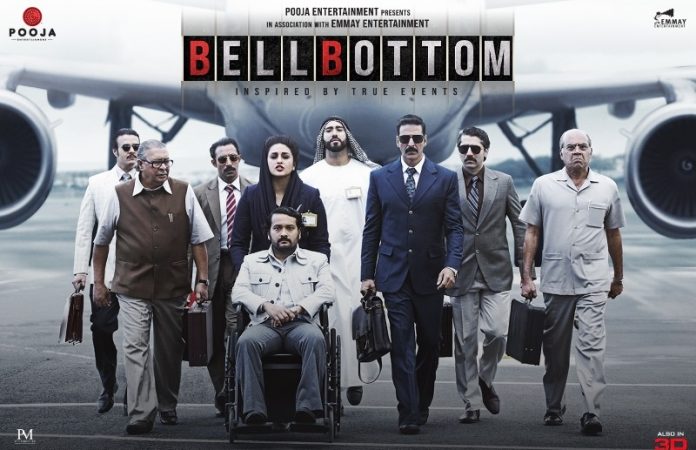 Espionage Meets Nostalgia. Akshay Kumar plays a RAW agent in Ranjit Tiwari’s brisk thriller in which Lara Dutta as Indira Gandhi steals some of his thunder. Deepa Gahlot has the full review here.

Ranjit M. Tewari’s film BellBottom, was not just shot during the pandemic, it was also the first to be released in cinemas in centres where the lockdown was lifted. In normal times, an Akshay Kumar film would have had a good opening, more so because of its trending bash-the-Pakis subject, picked from real life. A few weeks later, it has dropped on Amazon Prime, an OTT platform being the ultimate destination of every film these days.

Kumar’s character, Anshul Malhotra is reportedly based on a stylish spy, who wore his trousers bellbottomed amidst the staid safari suited Delhi bureaucrats, which led to his flamboyant codename, when the others in the team were given typical desi ones like Saand and Puchchi.

For those who remember the era, not just the fashion, but the political faces would induce nostalgia. Lara Dutta with some amazing prosthetic work plays Indira Gandhi, Kavi Raz her Pakistani counterpart, Zia-ul-Haq. Then as now, ISI is the troublemaker, instigating and funding separatist movements and terrorism in India.

A voiceover explains to the new generation viewer, that in the eighties, plane hijackings had become quite frequent, as a tool to extort money and free imprisoned militants. When the fourth airplane is hijacked on her watch, PM Indira Gandhi is advised by RAW analyst Anshul not to negotiate with the hijackers, and prevent refueling in Lahore, where the planes invariably land. He believes that would force a landing in Dubai, where RAW could launch a rescue mission, and put an end to this recurring menace. For him, it’s personal– the French teacher was recruited by the RAW head (Adil Hussain) and became a hijacking expert when his mother (Dolly Ahluwalia) was killed on a captured flight.

Of course, the babus scoff, but Mrs Gandhi gives him till the end of the day to save the passengers without any casualties. The film then gets to the serious business of defeating the ISI goons on foreign soil, without any passengers or RAW personnel being killed.

The action and intrigue would probably have worked better if at least a bit of the passengers’ trauma had also been included—the Khalistani militant, Doddy, (Zain Khan Durrani) is shown to be merciless.

When the ISI keep watch on them, and plant a mole in their midst to foil Indian intelligence agents, Anshul outwits them all because his mother had taught him that  “back-up ka bhi back-up hona chahiye.

Once the song-dance-family drama (Vaani Kapoor plays the sexy wife) is dispensed with in the first half, the film is enjoyable when it gets into action mode, which Akshay Kumar is best at. In 1977, the heart-stopping Raid On Entebbe was made about Israeli Defense Forces carrying out a daring and blood-soaked rescue mission called Operation Thunderbolt, at Uganda’s Entebbe Airport, where Palestinian militants had taken a hijacked plane. BellBottom does not reach that level, and Akshay Kumar is no Charles Bronson yet. There is a delightful twist at very end that hints at a sequel, if not a franchise.