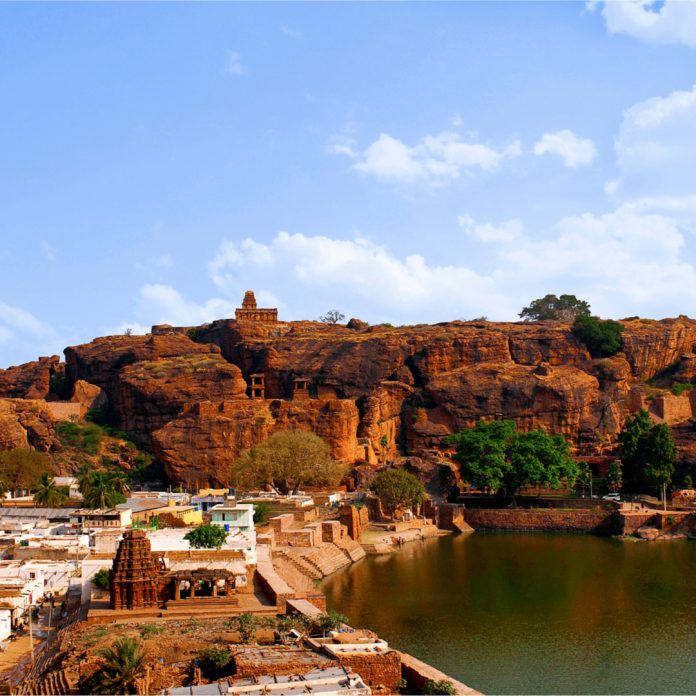 Badami lies about 140 kilometres northwest of Hampi, a three-hour car ride with a view of flattish brown green lands. But it is centuries apart. Hampi is about six hundred years old, with a fifteenth-sixteenth century vintage, and hails from the Vijaynagar Age.

Badami dates back even further – it was alive in the Chalukya Age, and dates as far back as the fifth, sixth century! I felt still and peaceful in Hampi but even more so in Badami. The air itself is old and heavy, silent with the memory of long forgotten kings.

Pulakeshin-I of the Chalukyan dynasty founded the city of Badami and the cave temples were built by his son Kirtiverman-I. The Pallavas destroyed the fort in a battle for supremacy and it was then renovated by Tipu Sultan many years later.

The Badami fort sits atop the hill where the caves are located and was once the residence of the Chalukyan Kings when Badami was their capital city. The current name of Badami is believed to have originated from the almond colour of its rocks.

Like its name, the history of Badami is rich and colourful. The city was once known as Vatapi and it was believed that two demon brothers, Ilvala and Vatapi lived there. Vatapi would disguise himself as an animal and IIvala would offer this meat to unsuspecting travellers. Once imbibed, the raksha Vatapi would come to life again. IIvala would beckon to him and Vatapi would burst out of the guests stomach, and kill the innocent traveller. This continued for a while.

One day, the powerful Sage Agastya visited them and ate the food that was offered to him by IIvala. But before IIvala could call out to Vatapi, Sage Agastya said “Vatapi, be digested”. And that was the end of Vatapi and the trouble he brought with him.

From a distance, the Badami caves look like a rough reddish structure – a massive uneven boulder, a plaything for a giant child. The caves are nestled on the placid calm bank of the Agastya Theertha Lake. The banks of the lake are dotted with a group of Bhutanath Temples which are dedicated to Lord Shiva, the great destroyer, the god of souls, spirits and ghosts. They date back to the seventh century.

The steps leading up to the caves are cut from the same single rocky outcrop from which the four stone-cut caves are built. Inside, the detailing, the intricacy and the patterns of the Hindu and Jain temples come to life. The carvings and sculptures deify Indian gods, many of whom are surrounded by intricate patterns of flowers, birds and animals. The front of each cave has a pillared veranda and at the back a cool sanctum.

These caves are important examples of Indian rock-cut architecture and the earliest cave dates from the sixth century, placing it firmly as the oldest dated Hindu cave temple in India.

The first and the lowest cave on the way up is dedicated to Lord Nataraj. The most striking panel here is of Shiva in the form of Nataraj, performing his Tandav (cosmic dance) . It is life size with eighteen hands and a young Ganesha by his side. Other panels in the caves shows him as Harihara who is half Shiva and Half Vishnu and as Ardhanarishvara who is half Shiva and half Parvati. This caves also shows Mahishasuramardini Durga killing demon Mahishasura.

Cave 2 is dedicated to Lord Vishnu. It’s flanked by celestial guardians and dwarf statues. The Vamana and Varaha avatars are depicted in this cave. In his Vamana avatar Vishnu went to King Mahabali in the form of a dwarf and requested three pieces of land. On being granted his request, he assumed a giant form called Trivikrama, and covered the three worlds in three steps. The giant form is depicted in this cave and his varaha avatar is shown in the form of a boar rescuing bhudevi or the earth, from the ocean.

The third cave is also dedicated to Lord Vishnu. It’s the oldest, finest and largest cave. Here Lord Vishnu is also shown in his Narasimha or Lion Avatar. The most beautiful image here shows a relaxed Lord Vishnu seated on a coiled serpent along with images of the Vaishnava pantheon. As in other caves every inch of the roof and pillars are carved.

Cave 4 is the newest one discovered and was excavated almost a century after the rest. This cave is dedicated to Jainism. It is a small cave with images of Jain Tirthankaras. Inside the sanctum, there is a large sculpture of Lord Mahavira seated in deep meditation also depicted Parshvanatha, the twenty-third Tirthankaras, and Bahubali, the son of the first Tirthankaras. The cliff with the caves overlooks sparkling Agastya Lake.

At the end of the day, I was extremely gratified to see the caves because I believe it bears testimony to the incredible art and architecture that evolved under the patronage of the Badami Chalukya rulers. A place I would recommend all of you to visit.

Urvi Piramal
Urvi Piramal oversees a professionally managed conglomerate with business interest in real estate, textiles and cutting tools. A wildlife enthusiast, she has authored two books on wildlife: in India and Africa.