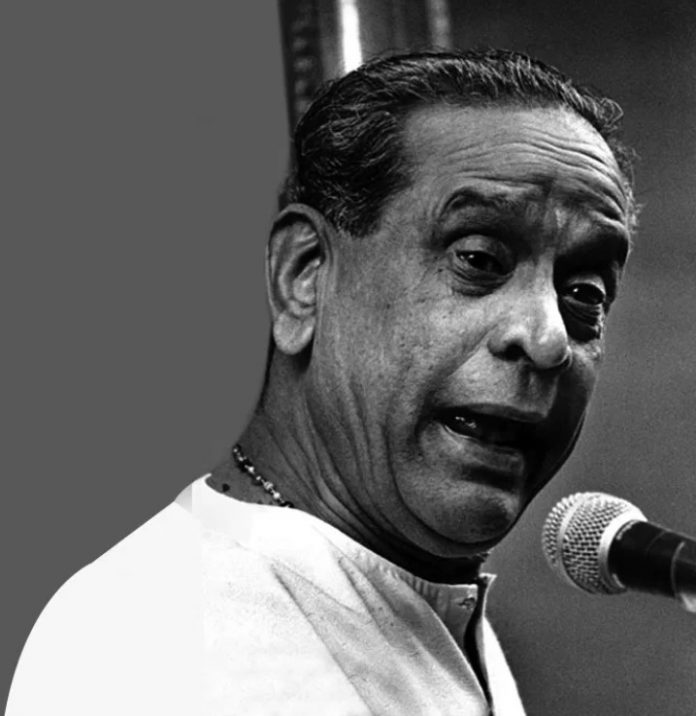 For Indian classical music, February 4 2022 is a landmark day, as it marks the birth centenary of the legendary vocalist Pt Bhimsen Joshi. While his contribution to Hindustani khayal has been enormous, he also had many popular light compositions.

To mark the momentous occasion, we choose 10 shorter pieces, covering film songs, thumris, abhang and bhajans. One of the doyens of Hindustani music, the Kirana gharana maestro was known for his powerful voice, thorough command over the nuances and magnetic stage presence. This list is in no particular order.

One of the best singing partnerships in a movie, it featured in the 1956 film Basant Bahar. it had Joshi singing for a court musician and Manna Dey for Gopal, the hero played by Bharat Bhushan. Shankar-Jaikishen gave the music and Shailendra wrote the lyrics. The story has it that Manna Dey was initially reluctant to sing as he was afraid to ‘compete’ against Joshi and even win. With great difficulty he was persuaded.

Joshi sang two songs for the 1985 film Ankahee, which had music by Jaidev. Based on a bhajan by Tulsidas, its words were, “Raghuvar tumko meri laaj, sada sada mein sharan tihari, tum ho gareeb nivaz”. The song was set in raag Mishra Khamaj. Joshi, who also sang ‘Thumak Thumak Pag Dumak’, won a National Award for the film, and so did Jaidev. Asha Bhosle sang two songs.

This 1988 song on national integration remains popular even today. Joshi began the song in the film made by Kailash Surendranath. He also composed the basic melody in raag Bhairavi. The lyrics were written by Piyush Pandey, with Louiz Banks and Ashok Patki working on the music. Lata Mangeshkar, M Balamuralikrishna and Amitabh Bachchan were among the many celebrities in the short video film.

One of Joshi’s most popular classical pieces, this was in raag Puriya Dhanashri. The words were ‘Payaliya jhankar mori, jhanan jhanan baaje jhankar”. A popular recording aired on Doordarshan featured Nana Muley on tabla and Tulsidas Borkar on harmonium. The composition was requested often by the audience, and the raag was one of his specialities.

Composed in raag Bhimpalasi, this one was about Lord Krishna, and had the words “Brij mein dhoom machaye Kanha”. It was set in the festival of Holi. The popular recording had Puroshottam Walawalkar on harmonium and Nana Muley on tabla. Today, a well-known version is sung by Pt Venkatesh Kumar.

This wonderful bhajan featured both the Bharat Ratnas Joshi and Mangeshkar. Music was by Shrinivas Khale and lyrics were by Pt Narendra Sharma. Both the singers took turns to deliver an immaculate song, and their coordination was marvellous. Another highlight was the use of bansuri.

One of the most requested pieces, this Kannada bhajan was written by Purandaradasa. It is sung or played at almost all Lakshmi Puja functions in North Karnataka. The main words are “Bhagyada Lakshmi baramma, nam amma ni, saubhagyada Lakshmi baaramma” and are sung as a prayer for good fortune.

This thumri in raag Bhairavi was first sung by Rahimat Khan of the Gwalior gharana, and recorded and popularised by Ustad Abdul Karim Khan, founder of the Kirana gharana. Joshi’s version was filled with intricate taans and improvisation. The maestro has also sung the other popular Bhairavi thumri ‘Babul Mora’.

Joshi often sang this at the end of his concerts, and this was considered one of his signature tunes. The bhajan in raag Bhairavi had the words “Jo bhaje Hari ko sada, so hi param pad paavega”. The lines, “Deh ke maala, tilak aur nahin kachoo kaam ke, prem bhakti ke bina nahin naath ke man bhaayega” reflect the song’s depth. Joshi was invariably accompanied by manjira on this.

While these are some of the lighter pieces, YouTube and the streaming channels have many of the longer khayal performances and recordings. Raags Miyan Ki Todi, Shuddh Sarang, Marwa, Puriya Kalyan and Darbari Kanhada are perfect for the centenary.