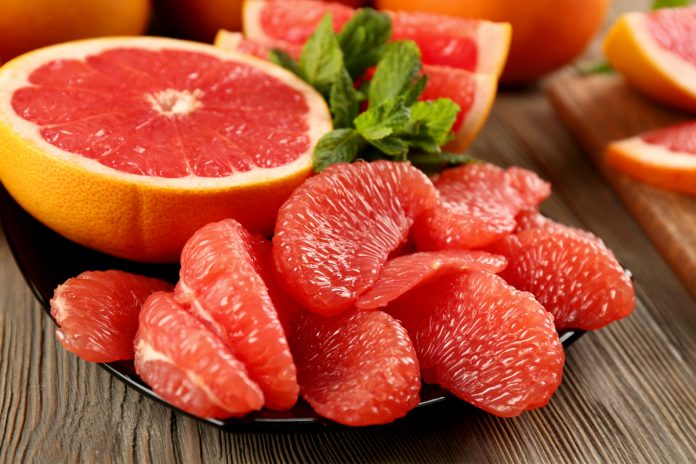 One thing is undisputed about the grapefruit and its legendary diet: It certainly has staying power.

The fad diet debuted in the 1930s in Hollywood, amidst claims that its namesake fruit contains fat-burning enzymes that melt off pounds. Nearly a century later, it continues to draw attention and followers.

The short-term diet’s main selling point is that it can help you lose roughly 7 kgs during a 10- to 12-day detox.

Sounds scary. Such a rapid and quantitatively huge weight loss can only spell trouble in our senior years.

This dramatic narrative was just to draw your attention to how overwhelmingly good grapefruit is for you…. In moderate consumption.

Grapefruit is often mistaken for a Pomelo also known as Chakotara, they can be found with either whitish pink, pinkish red, or red pulps – all with different levels of sweetness. While all offer similar benefits, reddish pink ones have high content of lycopene – a natural essential nutrient for cells.

First the similarities. Which is, they’re both large citrus fruits that are full of vitamin C, antioxidants, and fibre. In fact, the grapefruit is actually a hybrid of the pomelo and the sweet orange. This hybridisation occurred naturally.

Grapefruit benefits health in much the same way as pomelos.  Grapefruit nutrition is legendary, and something the fruit shares in common with its ancestor: pomelos, like grapefruit and grapefruit juice, benefit the immune system with antioxidants like vitamin C, and help lower blood pressure with potassium.

Consuming either pomelo or grapefruit may promote weight loss. The so-called “grapefruit diet” may be a gimmick, but both grapefruit and pomelo can help you lose weight. Both are rich in water and dietary fibers, which can help you feel full so you eat less (a bonus for pomelo is that it also contains protein, which also adds to the feeling of fullness). If you’re counting calories or carbs, however, keep in mind that pomelos are higher in both to grapefruit. Calories in a whole pomelo are twice that of a grapefruit (though grapefruit are smaller).

Despite their commonalities, the fruits aren’t interchangeable.

Their origins – Indigenous to Southeast Asia, the pomelo Citrus maxima, is the largest member of the citrus family and can grow to be the size of a watermelon.  Grapefruit Citrus paradisi was discovered on the Caribbean island of Barbados. Significantly smaller than pomelos, grapefruits generally grow to be about the size of a human fist.

Their flesh – Pomelo flesh are semi-transparent and have various hues, including dark pink, peach, yellow, and yellow-green. The colour of Grapefruit flesh is usually either white or pink.

Their peels – Grapefruit peels are often yellow-orange while unripe pomelos have green peels that turn yellow as the fruit ripens. Pomelo also has a thicker rind than the grapefruit

The way they taste – Like grapefruit, pomelos have a sweet to sweet-and-sour taste with a distinctly bitter note. But while a grapefruit’s refreshing smell is similar to that of a pomelo (in fact, if you’ve every purchased “grapefruit” essential oil, you may actually have gotten pomelo essential oil instead – the smells are almost identical), the taste of a pomelo is generally noticeably sweeter.

The way they’re eaten – Pink grapefruit is a popular breakfast treat, but someone new to the large citrus may wonder how to eat a grapefruit. Typically, a grapefruit is first halved, then the segments (much like oranges) are spooned out (the grapefruit spoon was created expressly for this purpose). Pomelos, on the other hand, should be peeled first and the center white pith (which is very bitter) removed.

Regardless of their differences, both fruits are nutritious, refreshing and delicious and offer abundant benefits.  Pomelos have more potassium, but have much less vitamin A.

A 2006 study published in the Journal of Medicinal Food, found that people who ate grapefruit (juice or half a fruit) before a meal had a lower spike in insulin two hours later than those taking a placebo, and fresh grapefruit was associated with less insulin resistance

While the results are promising in those without diabetes, blood-sugar reactions to food can vary widely, so if you have been diagnosed with type 2 diabetes, test your blood sugar after eating grapefruit to make sure it can be part of your healthy eating plan.

That’s because of the hefty dose of anti-oxidants, vitamins A and C in each serving. Vitamin C and A are huge as far as immunity boosting is concerned.

Some research indicates that as a seniors, not having enough vitamin C (and other micronutrients) may actually hurt your immune system.

Grapefruit may not prevent a cold but the vitamins inside may reduce your suffering or possibly the duration of a cold.

The pith is good for you

When you peel away the outer layer of a grapefruit, you may be tempted to pick off the white flesh that is between you and the juicy fruit, and throw it away. This stuff is called pith. Don’t do it.

Pith is very rich in antioxidants and nutrients and also soluble fiber which is going to help you feel fuller and impact your glucose reactions.

While the pith of grapefruit can have more of a bitter taste than say, oranges, it’s worth eating along with the fruit (if you can). Fibre also has the added advantage of helping lower blood sugar, cholesterol and possibly even colon cancer risk.

However if eating a pomelo, you should peel off some of the thicker pith in the center.

A grapefruit a day may help lower LDL or bad cholesterol levels by as much as 15.5%, according to a 2006 study in the Journal of Agricultural and Food Chemistry.

This is great news for your heart. LDL cholesterol is a type of fat that can build up in your arteries and raise the risk for heart attack and stroke.

However,  if you are taking a cholesterol-lowering drug, don’t add a grapefruit for extra effect—the FDA issued a warning in 2012 about interactions with medications.

Several studies have shown that people who eat half a fresh grapefruit or drink grapefruit juice before each meal lose more weight than people who do not.

Not all studies have shown the same weight-loss benefit and scientists don’t know if the effect seen in the studies was specifically due to grapefruit—or filling up on a low-calorie food in general—but fruits and vegetables should always be part of your strategy to lose or maintain weight.

What is 100% ironclad fact: Grapefruit delivers a lot of nutrition and water for very few calories: there are just 39 calories in one half of a grapefruit. Plus it leaves you feeling every full, so it’s a great choice if you want to boost your intake of high nutrient, low calorie foods.

At about 92% water, grapefruit has one of the highest water contents of any fruit. That makes it good for overall health.

About 20% of your daily fluid intake actually comes from food. So add some grapefruit to get closer to your daily H2O goal and choose the heavier of two fruits of equal size: It has more juice.

A large study conducted in Japan found that people who ate citrus (including grapefruit) throughout the week had a lower risk of developing cancer, especially prostrate and pancreatic, compared with the total group of participants.

The authors speculate that compounds in citrus fruits stop cancer cells from multiplying. They may also help repair damaged DNA, which contributes to the development of tumors.

The fibre in grapefruit may also help prevent colon cancer while fruits high in vitamin C and beta-carotene, which is in pink and red grapefruit, may lower the risk of esophagus cancer.

The combination of fiber, potassium, lycopene, vitamin C, and choline in grapefruit could all contribute to heart health.

An increase in your dietary intake of potassium and reducing the amount of salt they add to food can help prevent high blood pressure and a range of complications that can result from it.

The Asia Pacific Journal of Clinical Nutrition brings forth the point that Grapefruit may work on a cellular level, increasing the amount of ATP, which is an ornate way of referring to increased ‘cellular energy’. It gives the human body a feeling of fullness and normalcy, assisting it to fight fatigue and lethargy. Further, the high water content helps in keeping the skin supple and reducing the burning sensation caused during fever and similar situations. Grapefruit helps to dispel the general tiredness caused from mundane chores.

The gift of radiant and youthful skin

Packed with healthy acids – from citric to tartaric – which can play an essential role in your skin’s health by helping with exfoliation they  aid with breaking down dead skin cells and smoothing out the surface of the skin, this makes grapefruit excellent for acne. A fabulous source of vitamin C, it helps brighten the skin, as well as potentially fade pigmentation and blemishes.

Perhaps the most important benefit when it comes to vitamin C and skin is the fact it can support your skin’s production of collagen2. Collagen is a type of protein and helps keep your skin plump, elastic, and youthful.

How to Buy Grapefruit: Choose the heavier ones, for they are ripe and contain plenty of water. Smoothness and luster are other healthy indicators. A good chakotra is more aromatic near the stem.

How to Eat Grapefruit: To ensure the best tasting experience, the older mantra is “peel, peel, peel”, till only the tear drop-like sacs of juice remain. But for its total nutritional value the pith should also be consumed for its powerful benefits.

Storing Grapefruit: Being a hardy fruit, it can last at room temperature for about two weeks.

Health Alert! – Grapefruit contains furacoumarins,   a naturally occurring chemical that can react with many medications. Please consult you dietician and Physician before adding it to your diet.

Skin alert! – Though Grapefruit in a blend of other essential oils is excellent for skins of all ages (it benefits a 16 year old with acne and a 60 year old with age lines) – be warned it is phototoxic- which means you should not wear any formula that contains grapefruit and go out in the sun, as your skin will suffer from serious inflammation.