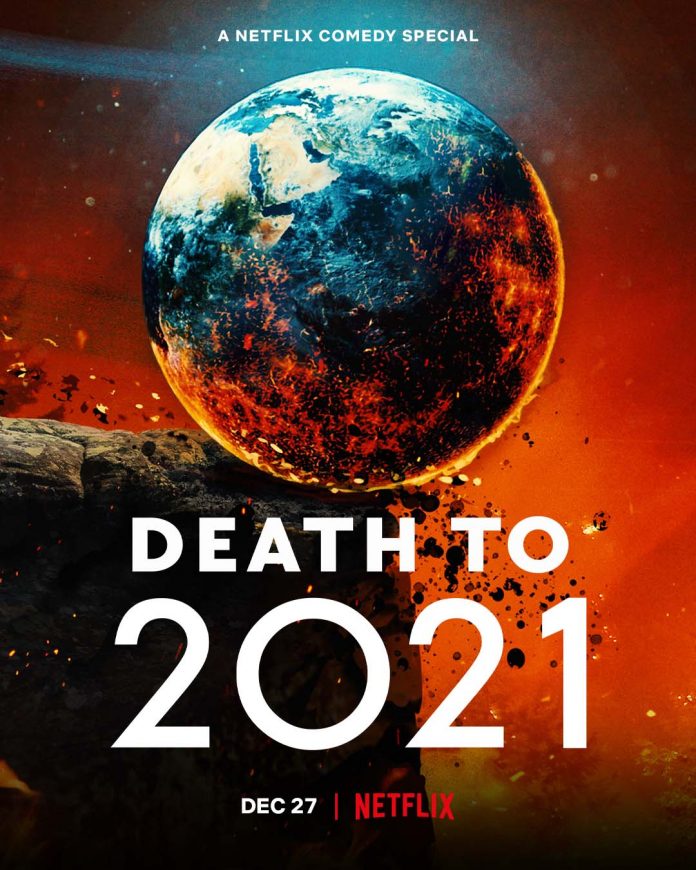 Humour could be the only way of coping with the troubles and absurdities of the year gone by. Carrying on the tradition set with last year’s satirical Death To 2020, the new show has some of the old cast members returning, and some new ones added.

The format of mixing real footage with scripted talking head interviews, created by Charlie Brooker and Annabel Jones, can be funny if enough weird bits of news can be collated, and 2021 had enough of them. The tragedy that was the COVID pandemic cannot be lampooned, but the anti vaccine and mask morons are just asking to be egged.

Ben Caudell leads the big team of writers for Death To 2021, directed by Jack Clough and Josh Ruben, and no humorist could have come up with the chaos in Washington when Donald Trump announced that the election had been rigged, and a bunch of his loony supporters stormed the Capitol. The show calls the new 84-year-old president, ‘the youthful political firebrand Joe Biden’ and makes him look ridiculous even when he is talking sense.

Christin Milioti plays Kathy Flowers, the dumb “American and Mom” who lands up at every protest gathering, whether it is pro-Trump or anti-mask. Her British counterpart is Gemma Nerrick played by the brilliant Diane Morgan, who says the damndest things with a straight face. She is the kind who keeps her tonsils in a cupboard, so that the COVID test can be done easily.

Hugh Grant sportingly plays the snobbish Professor Tennyson Foss, a fossil, who is baffled by all the ‘wokeness’ around him, and won’t do the “wokey-cokey.” He is firmly on the side of tradition, the monarchy, white male supremacy, and scornful of the multiracial cast of Bridgerton (TV show). Daniel Craig’s Bond movie No Time To Die comes in for some ribbing as does OTT blockbuster the Korean dystopian drama, Squid Game. An unabashedly right wing TV anchor, Madison Madison (Tracy Ullman) is worried about kids watching the show and growing up speaking “Korean with English subtitles.” She is also concerned about the foreign coronavirus variants coming into the country. “Make American germs again,” she declares.

There is the silly social media influencer Duke Goolies (Joe Keery), who wants to support the environment, so travels to sites of climate change disaster in his private jet. He takes a homebrewed vaccine instead of the ones made by big pharma companies, because they did not sponsor him.

The dull Academy Awards, the spectator-less Olympics in Japan are lamented, and much fun is poked at rich guys taking space flights. Spoofing the weepie Oscar’s segment on ‘Stars We Lost This Year,’ a list of Stars cancelled in 2021 is compiled that includes Matt Damon, Armie Hammer, JK Rowling—those who stay abreast of celeb antics would know why.

Lucy Liu appears as the sombre Washington correspondent, Snook Austin; William Jackson Harper as Zero Fournine, the CEO of the fictional social network, Yipyakker; and Stockard Channing as a journalist named Penn Parker, who speaks words of wisdom from a bar. Samson Kayo is Pyrex Flask, a scientist trying to make a better vaccine. Lawrence Fishburne delivers the voiceover in a suitably booming style.

The show is amusing, sometimes the humour is subtle, often outrageous, but does not tip into  cancel provoking territory and the only tasteless bit is the one on the death of Prince Philip.

The coronavirus leveled the world, and the internet made sure everyone experienced more of less the same ups and downs. Death To 2021 is a reminder to laugh at misfortune, because, what else can one do?