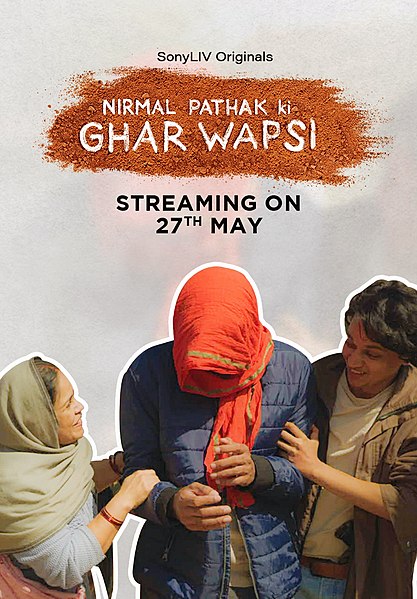 If the village-based series, Panchayat, were to be darker and less fairytale-like, then it could become Nirmal Pathak Ki Ghar Wapsi. In this SonyLiv series too, the protagonist is a city-bred man thrown into the unfamiliar rural universe, only he is a lot more clueless than realistically possible.

The eponymous Nirmal Pathak, returns to his ancestral village after 24 years (mentioning the reason for the absence would be a spoiler) and meets his father’s family for the first time. On the train to Buxar in Bihar, despite warnings from fellow passengers, he has his luggage stolen, and arrives to the boisterous welcome from his cousin, Aatish (Akash Makhija), and his gang of buddies. Aatish’s worldview is coloured by Salman Khan films, and like a proper Barjatya hero, he appoints himself Laxman to Nirmal’s Ram.

Aatish is to be married to the local MLA’s (Vineet Kumar) daughter, and has been promised an election ticket. Wedding preparations are on in the household that includes his silently suffering mother Santoshi (Alka Amin), his grandfather (Tarun Kumar), uncle Makhan (Pankaj Jha) and his family, aunt Genda (Garima Vikrant Singh) and her large brood.

Nirmal is curious about why his father had left the village, and discovers by and by, that there had been a family conflagration, that led to his exit. The relatives all treat Nirmal with great affection, however, but slowly his half-baked city liberalism rears its head and causes more harm than good.

Nirmal notices that Lablabiya (Kumar Saurabh), one of Aatish’s hangers-on is seated separately and given tea in a chipped clay mug. He throws a match into a pile of figurative dynamite when he starts questioning the casteism and sexism of the upper caste people of the village, including his own family. The lower caste cleaner explains that he has no problem with the system, but Nirmal wants to wipe out casteism and demand gender justice overnight. (In a genuinely effective scene, Lablabiya confesses that he was so thrilled to be offered tea in an upper caste home, that he did not see the cup.)

It is very strange that Nirmal, a writer, and son of a writer, does not know how the village ecosystem functions. Even if he has never been to a village, surely he is exposed to the news and has watched enough movies and serials, to know what the caste system is like in a Bihar village, and also that change cannot be imposed forcefully from the outside.

Overlook numskull Nirmal’s saviour complex, and the series (directed by Rahul Pandey and Satish Nair) has a lot of humour, warmth and emotional high points to offer, at least in the first three of the five episodes. The last episode falls into inexcusable melodrama, as Nirmal becomes a catalyst of tragedy for his family, particularly the happy-go-lucky and strangely impressionable Aatish. His “communist” (according to the MLA) interference, just leads to confusion and heartbreak all round. If there is a Season 2—because this one ends in a cliffhanger—then there will be a lot of damage for Nirmal to undo or repair.