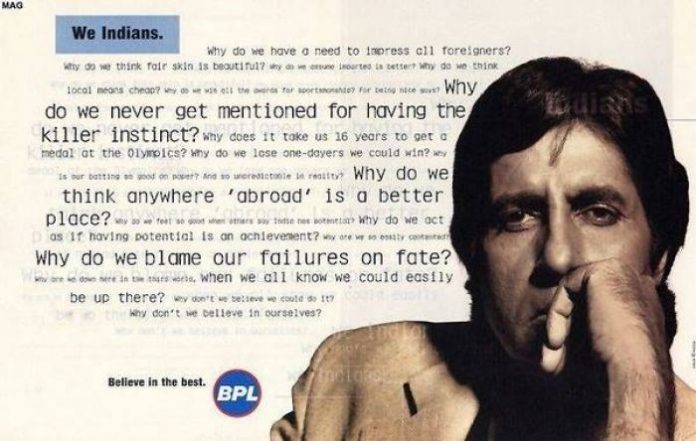 In the last 10 years or so, Amitabh has also repositioned himself as an endorser with integrity, writes Prabhakar Mundkur

Glamour was once defined as the magical or even unreal charm or beauty attached to a celebrity. In contrast, glamour has now become more popular and the star is less on a pedestal than ever before. Stars are accessible both on social media and traditional media and we have a constant peekaboo into their lives through the news. Glamour no longer has the aura and the mystery of yesteryears.

Celebrities are good for business. And some celebrities got inextricably linked with some brands. We have come a long way since then. Earlier, endorsing brands and their advertising was an easy source of income for celebrities. And an easy way to get attention and credibility for brands. In the early days of celebrity endorsement, it didn’t really matter what product the celebrity was endorsing and if there was a natural fit between the celebrity and the product.

One of the nagging marketing questions that has been asked over the last few decades has been whether consumers believe that film stars or celebrities actually uses the product they endorse. The answer to that question has always been that there is a willing suspension of disbelief about celebrity endorsements.

When Amitabh Bachchan debuted in 1969 with Saat Hindustani, no one would perhaps have imagined that he would soon become a superstar that held first the Indian film industry and later the entire country enthralled with his unique personality.

But perhaps it was only in 1972 with Zanjeer that he started developing a film personality as an action hero and later as the angry young man. As Amitabh turns 79 on October 11, he can look back on one of the longest histories in the film industry and of course as a brand endorser.

As a brand endorser, Amitabh’s deep and rich voice has always stood him in good stead. His voice and also his unique way of speaking has attracted many to do an imitation of him. Amitabh’s early endorsements were naturally relying on the handsome young man image like this ad for Bombay Dyeing. Of course his height has been a differentiating factor for Amitabh. At 1.83 meters or a little over 6 feet, it is only his son Abhishek at 6’3” who perhaps beats him.

What makes him the preferred choice when it comes to advertisements is his elegance, trustworthiness and mass appeal. Age has brought him even further appeal as a trustworthy spokesman for anything. With time he has become not only an endorser but a VIP citizen of this country. The reason why he is a common choice for most social advertising from Polio to Swaach Bharat.

In the last 10 years or so, Amitabh has also repositioned himself as an endorser with integrity. The turning point was him giving up the Pepsi endorsement, saying that he wouldn’t like to endorse products that could be harmful to the population at large. This has only increased his trust value as a brand. When asked why he changed his mind about Pepsi Rs 24 crores and 16 years later, Bachchan had said: “This impression is on the mind of the people… So, I stopped endorsing Pepsi,” Bachchan said. “I tell this to my son Abhishek and to daughter-in-law Aishwarya also… If you have to endorse a product then you have to conduct your life in such a manner that it does not affect others’ lives.”

In recent times, film stars have given way to sportstars in terms of popularity. And sports of course still means cricket when it comes to India although in recent times, we have begun to show interest in other sports. In the latest Duff and Phelps study of 2020, Virat Kohli continued to be No 1, followed by Akshay Kumar at No 2 and Ranveer Singh at No 3.

That is remarkable for Amitabh Bachchan to retain his place in the Top 10, considering he is 79 years old and India is largely enchanted with young stars. He has proven to be most evergreen star and celebrity in the country.

I can’t help quoting Shakespeare with a turn of his famous phrase from Anthony and Cleopatra: Age cannot wither him, nor custom stale his infinite variety.