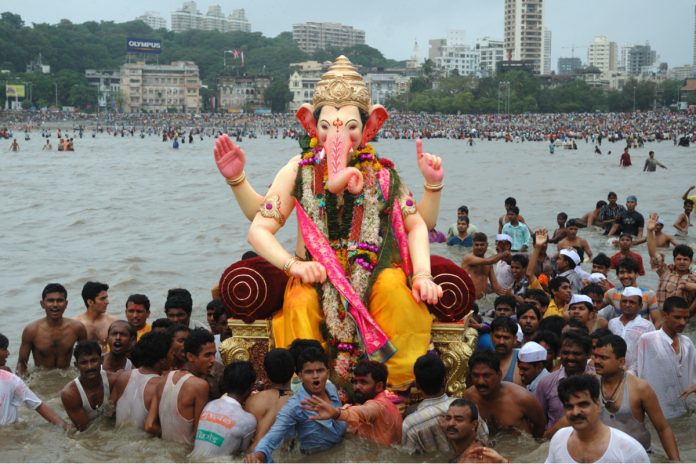 About five decades ago, when I first migrated to the USA, I was very homesick especially during festival time and none more so than the celebrations for Ganaraja and the day of Visarjan.  Festivities for Ganesh Chaturthi abound all over India with cities and provinces welcoming Bappa and a few days later bidding him goodbye till the next year in their own spectacular way.  My nostalgia takes me back to how we Puneites took this festivity to a whole different level, so join me on a trip down memory lane and enjoy the pleasures of simpler times.

I grew up in a ‘wada’ (many large buildings of more than one story with groups of rooms around an open courtyard), to be specific – Vaidya wada in Sadashiv Peth in the heart of the city. Major street corners around Pune would set up their own backdrops with lights and sounds and blaring music for the eight days.  To add to these lavish Creations, our wada had their own Ganpati in the courtyard.  Days before Ganpati utsav, we would go around collecting ‘chanda’ to pay for the decorations, lights, and sweet confectioneries for the eight-day celebration. A young adult resident Sushi would teach us dances to koli folk songs.  One, which still gets me swaying is ‘Mi dolkar, dolkar, dolkar dariyacha raja’. Our wada also boasted celebrity figures like Comedian Master Chhotu and Music maestro Vasant Desai.  (By the time I was six, Vasant Desai had left the wada but visited occasionally).  Bhimsen Joshi lived a couple of streets down and Sudhir Phadke was a regular visitor.  The beauty of our wada was its diversification -something unheard of in the 60’s. Brahmins, Marathas, Goswamis, Gujaratis – all low- and middle-income folks showed a camaraderie that is a hallmark of how special Vaidyawada was. Even Kharinbai (the cat lady who had a tomcat called ‘bokya), and Bapurao who epitomized negativity in every situation participated and exchanged wishes. Yashwantrao ‘Babya’ Mahadik (who went on to become a famous Marathi movie star) regaled us with mimicry. The Goswami brothers organized the musicals, played the harmonium, the teeter totters ran around with Piggy the pet terrier and mirth reigned supreme.  Different houses provided ‘khirapat/prasad’ for the aarti and entertainment included outdoor movies on a rented projector.

Each night as the festivities came to an end around eight, we gathered in bunches with neighbors and friends to check out the décor at different pandals.  The iconic ones that I remember distinctly were in Kasba Peth, Tulshibaug, Kesariwada and Jogeshwari.  Our most favorite was Shrimant Dagdusheth Halwai Ganpati which won every year hands down while Talyatla Ganpati in Sarasbaug came a very close second.  To date there is nothing that measures up to the sights and sounds of those glorious eight days only to be topped by the day of the Visarjan when trucks were turned into floats. Aarti was performed and Bappa was very carefully placed under the supervision of elders such as Colonel Sonowane and Rane Saheb. When it was time to start and join the procession of the umpteen floats on their way to Lakdi Pool, the dhols began, gulaal flew and young men danced with ‘lejims’ as the truck with our Ganpati followed for the final immersion in the Mula-Mutha rivers.

To a very small degree we have been successful in reviving the glorious days of the past in Houston, Texas.  Here, the eight-day festival is celebrated in individual homes and temples. The pomp and show are non-existent but venues like Shiv Shakti, Swami Narayan and Meenakshi temples invite devotees, food is donated by restaurants and local musical groups provide the entertainment. A few years ago, like-minded individuals came together and started organizing Visarjan day. A feather in our cap is that we were able to convince the city council to help us cordon off major streets in Little India for the Visarjan. Borrowing from the ideas of yesteryears, we rent a massive truck, decorate it, and load the main Ganpati murti.  In a central shopping center area, the priest performs aarti, loud dhol music is played and you guessed it gulaal flies everywhere.  Local restaurants set up booths with complimentary street food and it’s a party scene for a few hours.  When the truck finally moves towards the Sugarland Bayou (some 5 miles away) for immersion, a caravan of cars follows it, windows down, blaring music escorted at both ends with police on motorbikes.

As I started writing this column, I reached out to some of our neighbours from the wada and we renewed our memories together.  As we laughed remembering the special moments that led up to planning Ganesh Chaturthi celebrations every year, I found a tear trickling down suggestive of how forlorn we are in a foreign country away from the sights and sounds of our youth.