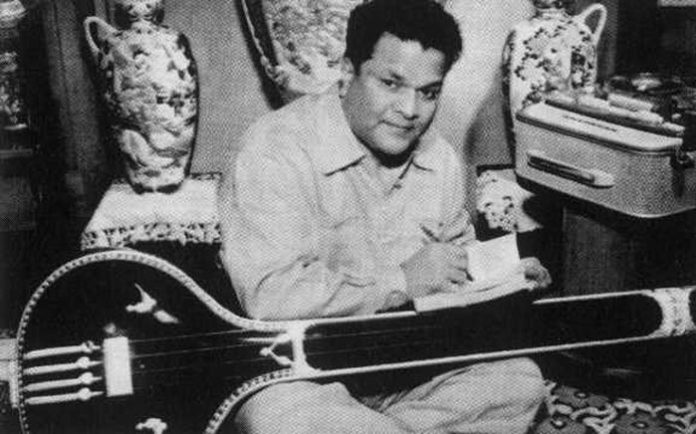 Though he wasn’t as prolific as one would have liked, music director Vasant Desai composed some really memorable songs in both Hindi and Marathi. Two of them, ‘Ae Maalik Tere Bande Hum’ and ‘Hum Ko Man Ki Shakti Dena’, have been sung as prayers in many schools.

Desai had a tragic death on December 22 1975 when the lift he was in crashed suddenly. He was 63. To mark his 46th death anniversary, we choose 10 of his masterpieces. The last two are in Marathi, and feature the great Kumar Gandharva.

The film had other great songs like ‘Dil Ka Khilona Haay Toot Gaya’, ‘Keh Do Koi Na Kare Yahaan Pyaar’, ‘Jeevan Mein Piya’ and ‘Haule Haule Ghoonghat Pat Khole”. But ‘Akhiyan Bhool Gayee’ was unique because of the coordination between Lata and Geeta Dutt, the catchy tune and brilliant choreography. Once again Bharat Vyas wrote the lyrics. Actress Ameeta appeared with a group of dancers.

This song reflected a completely different side of Desai’s musical personality. Ashok Kumar danced in a playgarden with children. He sang the song too, with Harindranath Chattopadhyay writing the lyrics. The song’s ‘chuk chuk’ line made it fun for kids. Many also described the song as a predecessor to rap, because of its speedy vocal style.

Because of Gulzar’s motivational lines, this song was used as a prayer in many schools. Desai’s composition was easy to sing along, and singer Vani Jairam was joined by a chorus. The lines were, “Humko man ki shakti dena, man vijay karein, doosro ki jay se pehle khud ko jay karein”. In the scene, Jaya Bhaduri was shown coming late to the school assembly.

An iconic Desai composition sung by the legendary Kumar Gandharva and Vani Jairam, it was a huge hit on radio. The lyrics were by Bal Kolhatkar who was said to be inspired by a conversation between Krishna and Rukmini. It was used in the drama Dev Deenaghari Dhavala whose music was released on vinyl.

The above list is ample proof of Desai’s versatility, as he composed love songs, motivational numbers, fun tunes and classical pieces with equal ease. He was also known for his role in teaching students to sing ‘Jana Gana Mana’ in schools across Maharashtra. He was a genius in the truest sense.